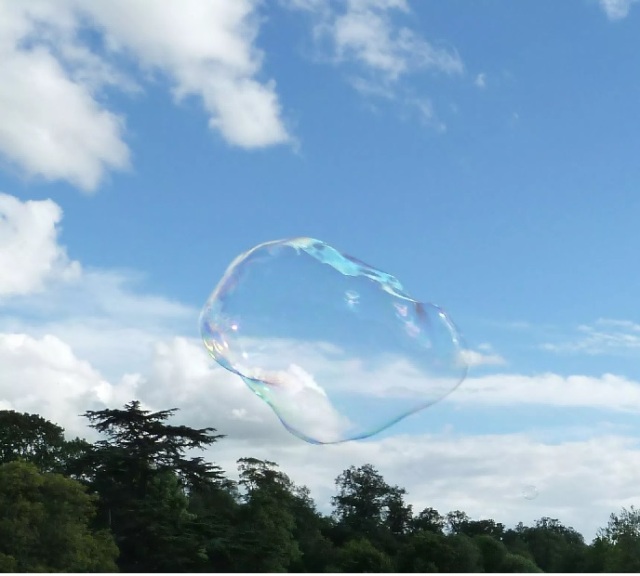 No-one in the tribe had seen the like before, yet the White Man had said his magic bottle housed hundreds.
All eyes looked skyward, watching fascinated as it collected rainbows in its wake.
Some thought it a miracle, a catcher of departed souls, transportation to the next life.
Children laughed as it drifted above them, pointing fingers as it made its way towards the trees.
It changed shape on the wind, distorting the clouds but passing otherwise gently on its way.
Would this be the one to break through the barrier and beyond?
It was not to be, a sharp twig punctured the defining line, and in a blink it was gone.
Everyone looked back towards the White Man, begging him to set free another.

I am a retired number cruncher with a vivid imagination and wacky sense of humour which extends to short stories and poetry. I love to cook and am a bit of a dog whisperer as I get on better with them than people sometimes! We have an elderly dog called Maggie who adopted us as a 7 week old pup in March 2005. From 2014 to 2017 'Home' was a 41 foot narrow boat where we made strong friendships both on and off the water. We were close to nature enjoying swan and duck families for neighbours, and it was a fascinating chapter in our lives. We now reside in a small bungalow on the Lincolnshire coast where we have forged new friendships and interests.
View all posts by pensitivity101 →
This entry was posted in blogging, Challenge, photoprompt and tagged ffftpp, ffftpp #35, fiction. Bookmark the permalink.