A Walk into Town 27th August

We were up early today and having brushed the dog (one ‘possible’ but not sure as it was so tiny), hoovered the house and had breakfast, it wasn’t yet 9 o’clock, so we thought we’d walk into town before the Bank Holiday mayhem started.

We’ve been avoiding the park, places with long grass and other dogs, so walked up on the roads. We wanted to go to the pet shop to get more supplies of flea spray and flea shampoo, then decided to have a cup of tea in a dog friendly cafe on the prom.
We hadn’t been there before, but they have a wooden floor rather than carpets, and Maggie was exceptionally good, so got a treat of some of the gluten-free carrot cake we’d treated ourselves to.

Town was, as expected, rather sleepy with the amusement arcades and shops just beginning to open for business. It was lovely to be able to amble our way to wherever we wanted to go without having to fight for right of passage.
We walked home along the prom which was just starting to get busy with holiday makers, but came off at another cafe and walked back along the roads. Maggie seemed quite content to be out and about again and not straining at the lead. When we got home, I let her into the garden to do her business.

It’s the first real walk Maggie’s had for a week, though these past two nights we have been walking her round the Avenue before going to bed as we’re unlikely to encounter anyone at that time. 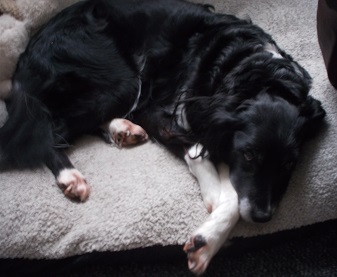 Thanks to everyone with tips and suggestions for our problem here. I really appreciate it.

Lunch today was a simple jacket potato with tuna and mixed veg, so no long periods in the kitchen cooking.
We’re in the throes of putting up a new and professional dartboard in the hall, and have a large protective board that practically covers the entire wall. Hubby intends to change the light fitting for a spotlight or similar as the lampshade is getting extremely nervous and agitated. 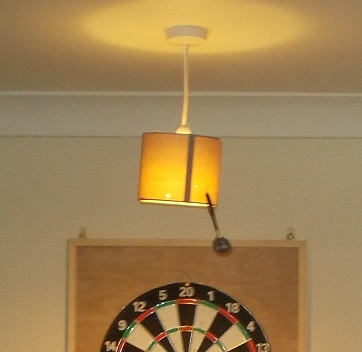 I am a retired number cruncher with a vivid imagination and wacky sense of humour which extends to short stories and poetry. I love to cook and am a bit of a dog whisperer as I get on better with them than people sometimes! We have recently lost our beloved dog Maggie who adopted us as a 7 week old pup in March 2005. We decided to have a photo put on canvas as we had for her predecessor Barney, and now have three pictures of our fur babies on the wall as we found a snapshot of my GSD so had hers done too. From 2014 to 2017 'Home' was a 41 foot narrow boat where we made strong friendships both on and off the water. We were close to nature enjoying swan and duck families for neighbours, and it was a fascinating chapter in our lives. We now reside in a small bungalow on the Lincolnshire coast where we have forged new friendships and interests.
View all posts by pensitivity101 →
This entry was posted in current events, diary, Maggie, walks and tagged beach, cafe, treats, walk. Bookmark the permalink.

6 Responses to A Walk into Town 27th August