Hubby and I both woke up feeling rested and quite chipper having had a pretty good night’s sleep, the first for months.
After our showers, our good spirits all went down the plughole, just like the water, and we hadn’t even had breakfast yet.

We decided to give Maggie a brush as although she hasn’t been scratching, we are still being vigilant and combing her every day.  I am so glad we invested in a proper flea comb as today we caught about a dozen fleas!
Neither of us could believe it, we’ve been so careful and the Stronghold should have been doing its stuff. We’ve fogged the house four times now, the most recent this past Friday, sprayed furnishings, washed bedding and sprinkled permethrin and Diatomaceous Earth  on a regular basis.
Poor Maggie ended up in the bath again with the flea shampoo (would not reduce the Stronghold effect), though by the time we’d finished, there were none apparent in the bath.
Hubby has since looked it up and there seems to be an epidemic of fleas sweeping the country. Terrific. Just what we DON’T need. 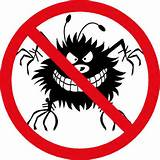 Already we are avoiding long grass and other dogs, so Maggie hasn’t been having her usual walks. With so many visiting dogs as well as residential, we are keeping our own problem contained to the best of our ability. However, it’s wearing us down as it seems no matter what we do, we can’t get rid of the damn things.

We did the washing, including the towels used for Maggie’s bath, and got it all out on the line. I started to make dinner, lasagna today and I was having extra green beans as I picked another handful this morning.
Hubby was cleaning out the car when I noticed through the back gate that the washing line had collapsed and everything was on the floor.
The bolt had come out of the wall and as the mortar was so crumbly, Hubby had to have a rethink and ended up going up the road to get the bits he needed.
I noticed a nasty mark on one of the garments on the line, which was now secured to a fence post for the time being, and brought it inside to handwash it out.
As I was doing so, the phone rang. It was MOH.

I was not exactly chatty, and when he asked how things were, I told him we were still trying to sort out the flea problem. He couldn’t believe it, saying he had no problem at all at home, Buddy wasn’t scratching and the answer was ‘to hoover every other day and brush the dog regularly’.
I felt like telling him that if he had no problem it was because he’d dumped it all at our door, but didn’t. My tongue bled where I bit it. He even suggested we go down to him ‘for a break’ (?????). Buddy was scratching and lousy when they left here, so for there to be ‘no problem’ without treating his house at least once beggars belief.
He sounded a little apologetic, then laughingly said we wouldn’t want him coming up again and felt he ought to send us a cheque. I told him I didn’t want his money. We were dealing with it and would get it sorted, though I felt obliged to thank him for the offer.

Then I noticed it was raining and (relieved) had to cut the call short.
Hubby arrived back home as I was getting the washing in, and the kitchen was a mini sauna as I’d forgotten I’d put the beans on when I came in to clean off the tee shirt. Luckily it was a low heat and they hadn’t boiled dry.

Dinner was actually very good, and afterwards we went outside, in the drizzly rain, to address the washing line issue.
Hubby has put a heavy duty wall mount D ring up on the wall and will fill in the vacated bolt hole when he can get a small bag of mortar mix.
The pole end of my line (as you can see in the April picture below) was set in a metapost, but had become somewhat wobbly, so that also had to be sorted. 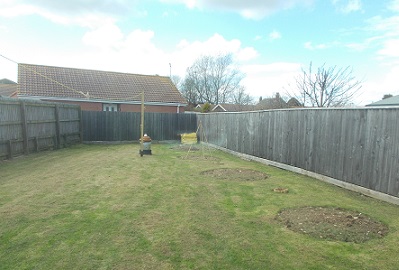 Hubby got the saw, and cut the post off above the top of the metapost. This reduced our post by four to six inches, but at least we had something solid to guide the metapost further into the ground. I asked for the sledgehammer.
Sledgies and I go back a fair way, and basically, don’t cross me if I’m wielding one.

I’m a lefty when I’m sledging, and it took just a dozen whacks to sink the metapost fully into the ground. We hadn’t been able to do that when we first put the line up as the ground was so hard.
I felt a lot better.
Then came the job of getting said whacked piece of wood out of the metapost so that we could put the shortened post back in.
Hubby screwed in a giant bolt with a washer, then added some heavy cord under it. Building a ‘wall’ out of bits of wood, he attached the other end of the cord to the post, then resting it on top of his wall, we used it as a lever, gradually increasing the wall height until the sawn off piece of wood lifted clear of the metapost. It took three rises, and no effort or force whatsoever to pull it out. Clever man, so wise to keep him as he’s useful.

OK, we were a little damp, and it’s still raining, but at least we won’t have to water the garden. On the plus side, the washing was practically dry before it started anyway.

I am a retired number cruncher with a vivid imagination and wacky sense of humour which extends to short stories and poetry. I love to cook and am a bit of a dog whisperer as I get on better with them than people sometimes! In November 2020, we lost our beloved Maggie who adopted us as a 7 week old pup in March 2005. We decided to have a photo put on canvas as we had for her predecessor Barney. We now have three pictures of our fur babies on the wall as we found a snapshot of Kizzy, my GSD when Hubby and I first met so had hers done too. On February 24th 2022 we were blessed to find Maya, a 13 week old GSD pup who has made her own place in our hearts. You can follow our training methods, photos and her growth in my blog posts. From 2014 to 2017 'Home' was a 41 foot narrow boat where we made strong friendships both on and off the water. We were close to nature enjoying swan and duck families for neighbours, and it was a fascinating chapter in our lives. We now reside in a small bungalow on the Lincolnshire coast where we have forged new friendships and interests.
View all posts by pensitivity101 →
This entry was posted in animals and pets, current events, diary, Dogs, health, Just a thought, Maggie, miscellaneous, oh dear, Uncategorized and tagged bad luck, DIY, fleas, My life. Bookmark the permalink.