Ah, the smell of the country

You can guess where I’m coming from, or going, with this can’t you.

We’ve had a pretty lazy day today really, settling down after dinner to relax.
Maggie curled up on her cushion and went to sleep, Hubby nodded off for forty winks, and I’ve been working through my reader.

Later, he did a small repair to the gate by putting a metal plate on the bottom corner as the wood had begun to split. Best do it now before it becomes a major issue.
There’s been a whiff on the air, and as soon as you say the word SMELL, Maggie bolts for cover. It’s not her, but it is a very unpleasant stink, and one we recognise, though didn’t understand why it’s here.

At first, Hubby thought we might have a blocked drain, but it’s hanging like a cloud all over the estate and talking to another dog walker, she confirmed that it was coming from a farm about 2 miles up the road. 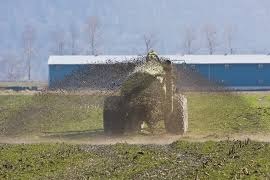 When we were in the cottage, we had fields directly behind and in front of our property. Muck spreading was a pain, and we had to be careful when putting the washing out as the stench would creep into our clothes and we’d have to wash them again.
It was rare for us to have the windows open anyway due to the noise from the main road or overhead planes (I sympathise with anyone close to an airport), plus when they were bringing in the harvest, the dust was horrendous.

When we were kids and Dad would be driving through the country, cows or pig farms were commonplace, as was the smell. There would be a joyous chorus of ROSES! from the back seat and a lot of laughter as we drove by. Happy Days.

I am a retired number cruncher with a vivid imagination and wacky sense of humour which extends to short stories and poetry. I love to cook and am a bit of a dog whisperer as I get on better with them than people sometimes! In November 2020, we lost our beloved Maggie who adopted us as a 7 week old pup in March 2005. We decided to have a photo put on canvas as we had for her predecessor Barney. We now have three pictures of our fur babies on the wall as we found a snapshot of Kizzy, my GSD when Hubby and I first met so had hers done too. On February 24th 2022 we were blessed to find Maya, a 13 week old GSD pup who has made her own place in our hearts. You can follow our training methods, photos and her growth in my blog posts. From 2014 to 2017 'Home' was a 41 foot narrow boat where we made strong friendships both on and off the water. We were close to nature enjoying swan and duck families for neighbours, and it was a fascinating chapter in our lives. We now reside in a small bungalow on the Lincolnshire coast where we have forged new friendships and interests.
View all posts by pensitivity101 →
This entry was posted in Just a thought, Memories, miscellaneous, My life and tagged country smell, farms, fields, miscellaneous. Bookmark the permalink.

4 Responses to Ah, the smell of the country