Our challenge:
Write a poem or story using the psychological test as inspiration. What do you see in the image? What emotions does it evoke? 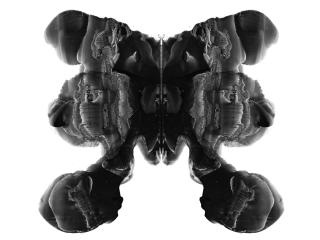 She felt herself slipping into unconsciousness, yet aware of her surroundings. Weird.
The Doctor had said hypnosis could help her.
She was led to a table upon which was a deck of cards.
Her hand recoiled as if burnt when she turned over the first image.
The many faces of those drowning and absorbed into infinity, the twin demons devouring their souls. There was no escape.
The empty hollow sheltered the Devil, his eyes searching her out from the shadows, calling her to follow him, to enter into his realm.
The blackness quivered in anticipation.
He was demanding the final offering, one only she could provide.
She would not yield the ultimate.
She awoke screaming but alive, though in unfamiliar surroundings.
The Doctor said hypnosis may help her.
His cards were still on the table.
She could not touch them.

I am a retired number cruncher with a vivid imagination and wacky sense of humour which extends to short stories and poetry. I love to cook and am a bit of a dog whisperer as I get on better with them than people sometimes! We have recently lost our beloved dog Maggie who adopted us as a 7 week old pup in March 2005. We decided to have a photo put on canvas as we had for her predecessor Barney, and now have three pictures of our fur babies on the wall as we found a snapshot of my GSD so had hers done too. From 2014 to 2017 'Home' was a 41 foot narrow boat where we made strong friendships both on and off the water. We were close to nature enjoying swan and duck families for neighbours, and it was a fascinating chapter in our lives. We now reside in a small bungalow on the Lincolnshire coast where we have forged new friendships and interests.
View all posts by pensitivity101 →
This entry was posted in blogging, Challenge, photoprompt and tagged Mindlovesmisery’s Menagerie, photoprompt, sunday writing prompt. Bookmark the permalink.
%d bloggers like this: