I rang Bro yesterday evening as it was the start of his day and his birthday. I’d already sent a card, and he too had one of my Happy Half Year greetings. He thought my poem was fun.
He’s spoken to my uncle (Mum’s brother) recently and the heat is getting to them too. Sis has also been in touch with SIL on FB. We’ve already seen on the internet that her house is sold STC, and apparently the purchase of her new one is going through or has been completed. I don’t expect to hear anything directly but I’m OK with that.

My walk today was the same route as yesterday, but totally different. There wasn’t much difference in the time either as both of us had a decent night’s sleep, though Hubby was up first this morning. He’s hurt his knee, so I’m walking Maggie on my own for now.
I saw NO-ONE on our walk, no other dog walkers, no-one in the park, just geese and yet another new clutch of ducklings (10).

On the beach, the tide was going out, and though that in itself is not unusual, what was was the noise coming from the gulls along the water line. The beach was covered in them, and I can only think that they were having breakfast on the exposed shellfish as the water receded just along that particular stretch as further up the sand was clear. 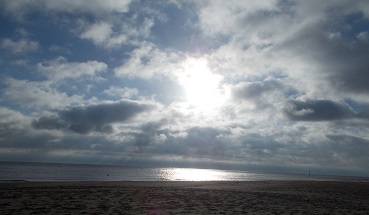 No two days are the same here, and at the moment I’m making the most of it as the holidaymakers will be arriving shortly. We’ve already seen evidence of fish and chip wrappers thrown from car windows, additional dog mess not cleared up, and empty bottles and cans in the park or along the prom.

I am a retired number cruncher with a vivid imagination and wacky sense of humour which extends to short stories and poetry. I love to cook and am a bit of a dog whisperer as I get on better with them than people sometimes! We have recently lost our beloved dog Maggie who adopted us as a 7 week old pup in March 2005. We decided to have a photo put on canvas as we had for her predecessor Barney, and now have three pictures of our fur babies on the wall as we found a snapshot of my GSD so had hers done too. From 2014 to 2017 'Home' was a 41 foot narrow boat where we made strong friendships both on and off the water. We were close to nature enjoying swan and duck families for neighbours, and it was a fascinating chapter in our lives. We now reside in a small bungalow on the Lincolnshire coast where we have forged new friendships and interests.
View all posts by pensitivity101 →
This entry was posted in beach walks, current events, diary, Walk Thoughts and tagged beach, dog walk, gulls, morning, walks. Bookmark the permalink.
Loading Comments...
Comment
×
%d bloggers like this: