I woke up with Jack Sprat on my mind this morning, and thought it very appropriate bearing in mind Hubby’s and my dietary concerns just now.
Although they aren’t akin to the nursery rhyme, they are becoming quite different and it is getting to the stage where anything I cook (with the label Dis-made as he puts it) is causing him reflux issues no matter how careful I am draining off excess fats or adding/not adding spices and seasoning.

The latest problem is tomatoes.
I have already ditched my tube of tomato puree, and our plants are going beautifully nuts now, but it seems I am going to be the only one to enjoy them. 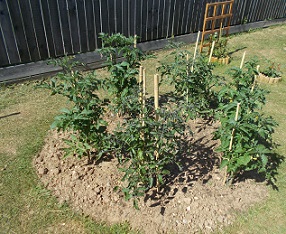 Tomatoes are a basic in my bolognese, chilli, lasagne and even a cottage pie if I’m using less minced beef, not forgetting garnishes on McCheese and salads. Hubby’s digestive system cannot handle fresh tomatoes, though, for now, the tinned variety isn’t affecting him too badly.
We have already discovered other veg like onions, garlic, peppers, broccoli and cauliflower don’t suit his palette and as the SW success method is having a third of your plate with ‘speed food’ (ie. veg or fresh fruit), it is getting increasingly difficult to prepare a meal to suit us both without having to cook extra for one of us.

I won’t be defeated though.
I love tomatoes, and they are a speed food, so guess what I’m packing my plate out with along with raw carrots?
Today we are having a jacket potato and tuna with a side of peas, cucumber and lettuce for both of us and tomatoes for me.
We’ll never look like Jack and Joan, but we won’t starve!

Jack ate all the lean,
Joan ate all the fat.
The bone they picked it clean,
Then gave it to the cat

I am a retired number cruncher with a vivid imagination and wacky sense of humour which extends to short stories and poetry. I love to cook and am a bit of a dog whisperer as I get on better with them than people sometimes! In November 2020, we lost our beloved Maggie who adopted us as a 7 week old pup in March 2005. We decided to have a photo put on canvas as we had for her predecessor Barney. We now have three pictures of our fur babies on the wall as we found a snapshot of Kizzy, my GSD when Hubby and I first met so had hers done too. On February 24th 2022 we were blessed to find Maya, a 13 week old GSD pup who has made her own place in our hearts. You can follow our training methods, photos and her growth in my blog posts. From 2014 to 2017 'Home' was a 41 foot narrow boat where we made strong friendships both on and off the water. We were close to nature enjoying swan and duck families for neighbours, and it was a fascinating chapter in our lives. We now reside in a small bungalow on the Lincolnshire coast where we have forged new friendships and interests.
View all posts by pensitivity101 →
This entry was posted in diary, food, Just a thought, Memories and tagged childhood, food, nursery rhyme. Bookmark the permalink.

3 Responses to Mr and Mrs Sprat