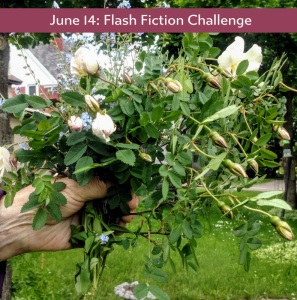 June 14, 2018, prompt: In 99 words (no more, no less) write a story that includes a bouquet. You can explore the meaning of the word or gather a bunch of flowers. Go where the prompt leads.

Her hands were bloody and dirty, nails broken and uneven.
But the smile was a full one thousand watts as she handed the bouquet to me.
‘From the garden’ she announced proudly.
‘I picked them myself, just for you. Sorry they’re a bit untidy and not tied with a fancy ribbon, but I wanted you to have them.’
Mr Robbins looked over at me and smiled sadly.
They were actually his roses, from his garden, but Gran didn’t realise that.
Gone were the days when she tended her own flower beds, but no doubt the memories were still there.

I am a retired number cruncher with a vivid imagination and wacky sense of humour which extends to short stories and poetry. I love to cook and am a bit of a dog whisperer as I get on better with them than people sometimes! We have an elderly dog called Maggie who adopted us as a 7 week old pup in March 2005. From 2014 to 2017 'Home' was a 41 foot narrow boat where we made strong friendships both on and off the water. We were close to nature enjoying swan and duck families for neighbours, and it was a fascinating chapter in our lives. We now reside in a small bungalow on the Lincolnshire coast where we have forged new friendships and interests.
View all posts by pensitivity101 →
This entry was posted in #flash fiction, blogging, Challenge and tagged #flash fiction, Carrot Ranch 99 word challenge. Bookmark the permalink.