Hubby asked me to water the garden today. Not a problem, especially as we now have one of these super-duper hoses that don’t kink and grows to 3 times its original size.

Hubby used it the day we bought it, and it’s brilliant.
Then I happened.

I plugged it in, and walked it down the garden hosing the onions, beans, tomatoes, roses, and fruit bushes as I went.
It was terrific, then suddenly the water flow stopped.
I looked behind me and could see nothing amiss, then I looked at the snake in my hand and it had a very pregnant transparent bulge which suddenly went 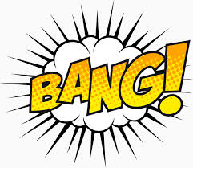 and I got soaked.
Luckily we’d kept the box and receipt so could take it back, but Hubby had a go at fixing it first.
He skinned it back, and repositioned the end, then reassembled it and attached it to the hose reel connection.
I turned the water on at the tap V E R Y  S L O W L Y, there was a whoosh and a pop, and it flew off the end.
Hubby tried again and the same thing happened.
After four attempts we thought Sod It, back it goes for a replacement. Then as Hubby was gathering it all to drain, he noticed something on the grass that was part of the fittings.
So we stretched it all out again, he played around and fitted everything that needed to be attached.
Very carefully, we turned the tap on, and kept everything crossed.
No mishaps, so we increased the pressure slightly.
With Hubby on connection watch and me tentatively watering the rest of the plants, we appear to have resolved the problem.

Incidentally, the picture above shows a magic hose as it’s not connected to anything, fully coiled and yet still spraying water.
Note:
If you are thinking of getting one of these extending hose pipes, make sure it’s completely unwound before you turn the tap on, as although it may not kink, it does twist (and I shout)!

I am a retired number cruncher with a vivid imagination and wacky sense of humour which extends to short stories and poetry. I love to cook and am a bit of a dog whisperer as I get on better with them than people sometimes! We have recently lost our beloved dog Maggie who adopted us as a 7 week old pup in March 2005. We decided to have a photo put on canvas as we had for her predecessor Barney, and now have three pictures of our fur babies on the wall as we found a snapshot of my GSD so had hers done too. From 2014 to 2017 'Home' was a 41 foot narrow boat where we made strong friendships both on and off the water. We were close to nature enjoying swan and duck families for neighbours, and it was a fascinating chapter in our lives. We now reside in a small bungalow on the Lincolnshire coast where we have forged new friendships and interests.
View all posts by pensitivity101 →
This entry was posted in diary, humour, veg and garden and tagged gardening, oops. Bookmark the permalink.

8 Responses to Pop and you’re wet