Hello and welcome to Joy’s 166th FFfAW challenge of 100-150 words!
This week’s photo prompt is provided by Enisa. 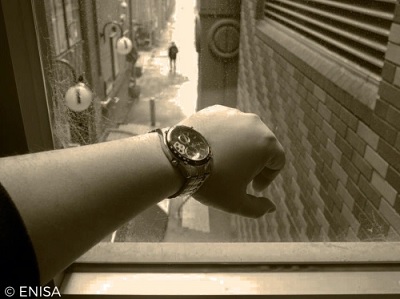 ‘It must be broken,’ he complained. ‘Typical junk bought cheap.’
He threw it on the table and walked out.
I was hurt.
It wasn’t junk, and it wasn’t cheap. It had cost me an entire week’s wages.
It was also the final straw.
His son picked it up and admired it, pushing the pin back in.
It ticked merrily.
‘Are you going to take it back?’
‘Why?’ I asked. ‘Do you like it?’
‘It’s different. None of the digital stuff everyone else is wearing. I think it’s smart.’
‘You can have it then.’
‘But it’s not my birthday.’
‘It doesn’t matter. I won’t be here for your birthday so it’ll be something to remember me by.’
‘You’re really leaving then?’
I looked him straight in the eye and answered in the affirmative.
‘Can I come with you? I don’t like him much either.’
We packed together.

I am a retired number cruncher with a vivid imagination and wacky sense of humour which extends to short stories and poetry. I love to cook and am a bit of a dog whisperer as I get on better with them than people sometimes! We have an elderly dog called Maggie who adopted us as a 7 week old pup in March 2005. From 2014 to 2017 'Home' was a 41 foot narrow boat where we made strong friendships both on and off the water. We were close to nature enjoying swan and duck families for neighbours, and it was a fascinating chapter in our lives. We now reside in a small bungalow on the Lincolnshire coast where we have forged new friendships and interests.
View all posts by pensitivity101 →
This entry was posted in blogging, Challenge, fiction and tagged fffaw, fffaw#166, short fiction.. Bookmark the permalink.