Many of my readers know we lived on a boat in a marina for three years.
In that time, we watched nature at close quarters, ducks, geese, swans, even a pheasant once which Maggie lifted on the dog walk and I didn’t even know it was there!

The ducks fascinated me, and I named a few. I got some good shots too of ducklings and  young cygnets, and when we went on our trips up river, fields were full of Canada geese and if we were lucky, goslings.

The park here is full of Canada geese, and mallard ducks, just like we had on the marina.
It would appear we have a relative of the Migrant Three here:

Sadly this reduced to two by July as we found the oldest white duck dead in the water and fished her out.

Photos: Our migrant three and then two.

Also, we have another Laughing Duck here and in the main, the males outnumber the females by about four to one.

We noticed another type of duck the other day and since then the number has grown to 11!

These aren’t my pictures, but black and white tufted ducks are swimming merrily on the lake, their distinctive orange eyes gazing eerily at you.

I’m so hoping to get some pictures of ducklings and goslings when they arrive. Unlike in the marina, they shouldn’t have quite so many predators to pick them off. 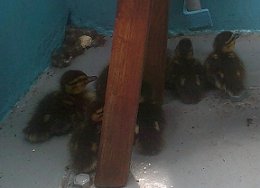 Photo: May 2015, aboard a neighbour’s boat which was ‘grounded’ as Mrs Mallard had taken up residence and laid 8 eggs, 7 of which hatched.

I am a retired number cruncher with a vivid imagination and wacky sense of humour which extends to short stories and poetry. I love to cook and am a bit of a dog whisperer as I get on better with them than people sometimes! We have recently lost our beloved dog Maggie who adopted us as a 7 week old pup in March 2005. We decided to have a photo put on canvas as we had for her predecessor Barney, and now have three pictures of our fur babies on the wall as we found a snapshot of my GSD so had hers done too. From 2014 to 2017 'Home' was a 41 foot narrow boat where we made strong friendships both on and off the water. We were close to nature enjoying swan and duck families for neighbours, and it was a fascinating chapter in our lives. We now reside in a small bungalow on the Lincolnshire coast where we have forged new friendships and interests.
View all posts by pensitivity101 →
This entry was posted in ducks, life afloat, Marina, My life, narrow boat, nature, observations and tagged ducks, nature. Bookmark the permalink.

7 Responses to More Every Day