Bet you were wondering where I’d been.
We have had a most productive day in the potting compost.
Our guys are doing brilliantly. Douglas stood at 12 inches tall this morning, Hubby’s was 9 inches with Reginald and a fourth bean measuring up at 7 inches. 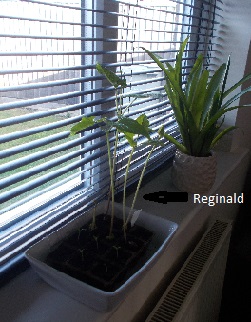 They are so tall, we have repotted them today, and they all have named supportive sticks.
Bean Fifth isn’t doing too badly, but number six was another non-runner, so we have gone straight in with a big pot and stick, and planted Later Starter the Third.

Not to be outdone, we had five tomatoes yesterday and number six said hello this morning. 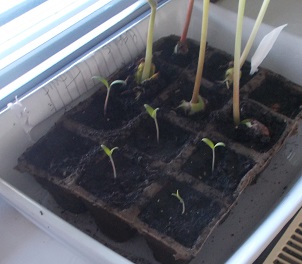 We decided to buy some longer canes for the beans afterall, so their patch has moved up, and the original six foot long canes will be used for our tomatoes.

The potatoes obviously heard there was a lot going on and wanted to get in on the act, so two of our eight have decided to test out the sunny view above soil level.
The onions are getting fed up in their bag and have started to go their own way.
We can take the hint and they will be put out tomorrow.

I am a retired number cruncher with a vivid imagination and wacky sense of humour which extends to short stories and poetry. I love to cook and am a bit of a dog whisperer as I get on better with them than people sometimes! In November 2020, we lost our beloved Maggie who adopted us as a 7 week old pup in March 2005. We decided to have a photo put on canvas as we had for her predecessor Barney. We now have three pictures of our fur babies on the wall as we found a snapshot of Kizzy, my GSD when Hubby and I first met so had hers done too. On February 24th 2022 we were blessed to find Maya, a 13 week old GSD pup who has made her own place in our hearts. You can follow our training methods, photos and her growth in my blog posts. From 2014 to 2017 'Home' was a 41 foot narrow boat where we made strong friendships both on and off the water. We were close to nature enjoying swan and duck families for neighbours, and it was a fascinating chapter in our lives. We now reside in a small bungalow on the Lincolnshire coast where we have forged new friendships and interests.
View all posts by pensitivity101 →
This entry was posted in Bean Watch, diary, veg and garden and tagged Bean Watch, Colin's Bean. Bookmark the permalink.