Every week, Sue gives us one of her pictures as a prompt for inspiration in whatever form we choose. 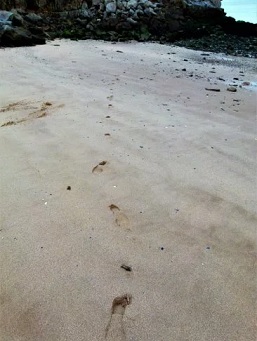 ‘We’re not alone on this island,’ Jake said. ‘I found footprints in the sand this morning.’
‘Don’t be silly. They were probably ours from yesterday and the tide hadn’t washed them away.’
‘No, they weren’t Angela. These were different.’
‘Your imagination is running away with you. The brochure said we would have the island completely to ourselves for two glorious weeks.’
‘I know what it said. Hell, I paid for it! But I’m telling you, we’re not alone here!’
‘Maybe it’s security to make sure we don’t steal anything.’ she snickered. ‘Though how we’d get away with it would be a miracle as the cruiser dropped us off with just our bags, and we’re being picked up the same way.’
‘Look, we wanted a holiday away from everyone and everything. There’s no communications here, no phones, no TV, no radio, and our mobiles and laptops were taken away from us on arrival. Dammit! There’s no way to call for help!’
‘Stop worrying! Show me where you saw the footprints.’
Jake took her down to the beach, and sure enough, the footprints were still there.
‘See! ‘
‘Idiot. They’re yours before you took your shoes off.’
‘I was wearing sneakers Angela.’

I am a retired number cruncher with a vivid imagination and wacky sense of humour which extends to short stories and poetry. I love to cook and am a bit of a dog whisperer as I get on better with them than people sometimes! We have an elderly dog called Maggie who adopted us as a 7 week old pup in March 2005. From 2014 to 2017 'Home' was a 41 foot narrow boat where we made strong friendships both on and off the water. We were close to nature enjoying swan and duck families for neighbours, and it was a fascinating chapter in our lives. We now reside in a small bungalow on the Lincolnshire coast where we have forged new friendships and interests.
View all posts by pensitivity101 →
This entry was posted in blogging, Challenge, photoprompt and tagged #write photo, photoprompt. Bookmark the permalink.