The dogs have had two good walks today, I cooked a sort of roast, and we’ve played four games of scrabble. I’m feeling good.

Hubby and MOH took the mutts down to the railway this morning whilst I did the housework and later this afternoon we all went out together to a different part of the old line to enjoy the fresh air and glorious sunshine.
Buddy is around the same age as Maggie and stiff in his joints too so the pair of them have flopped and given us snoring in stereo, bless them. 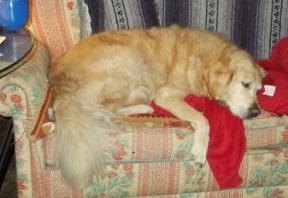 Our scrabble games have been pretty good though. MOH and I both put down seven letter words in the first game, our combined total being 650 points.
In game two, I had two seven letter words I couldn’t put down, but MOH got out another one, and our joint score was 624.
Game three was lousy. We couldn’t get the higher scoring letters to count other than face value, though MOH did make a comeback by putting INVADER down on a triple word and making two  two-letter words in so doing, so scored the best total of the day with 93.
Our overall total was a mere 528 so we weren’t very impressed with ourselves.
Time for a cup of tea!
The fourth game was another high score of 646 with me getting two seven letter words out, and the only game MOH didn’t win outright.

Tomorrow it’s due to rain so will probably be a domino rally. We haven’t played dominoes since we bought MOH the scrabble set over a year ago!

Lunch has been requested of cauliflower cheese. No problem.

I am a retired number cruncher with a vivid imagination and wacky sense of humour which extends to short stories and poetry. I love to cook and am a bit of a dog whisperer as I get on better with them than people sometimes! We have recently lost our beloved dog Maggie who adopted us as a 7 week old pup in March 2005. We decided to have a photo put on canvas as we had for her predecessor Barney, and now have three pictures of our fur babies on the wall as we found a snapshot of my GSD so had hers done too. From 2014 to 2017 'Home' was a 41 foot narrow boat where we made strong friendships both on and off the water. We were close to nature enjoying swan and duck families for neighbours, and it was a fascinating chapter in our lives. We now reside in a small bungalow on the Lincolnshire coast where we have forged new friendships and interests.
View all posts by pensitivity101 →
This entry was posted in diary, friends, games, My life and tagged competition, games, MOH. Bookmark the permalink.
Loading Comments...
%d bloggers like this: