The guys in the met office have got things right and we have woken up to a fair few inches of snow this morning.
The wind was howling last night, and the heating kicked in a few times, so temperatures had dropped as they forecast.
At 8am we could still make out the kerb opposite, and as they are about three inches high, it gives you an idea of true depth.
However, it has been snowing all morning, and the white-out has obliterated the view of the beach flats. An hour and a half later the kerbside has disappeared. 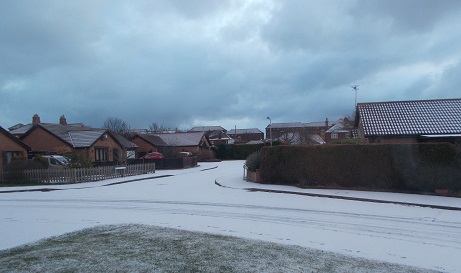 The above is yesterday’s picture.
Here are today’s at 7.am (Hubby’s) and mine at 9.45 respectively. 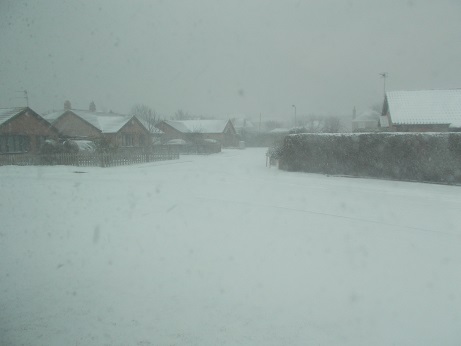 This is directly opposite us now. Our front lawn and the road are there, honest!

Maggie is feeling the cold despite us putting on her jacket, second waterproof topcoat and fluorescent jacket to provide her with layers to face the chill. The wind is bitter, and she has been sick this morning, so we are keeping her warm and staying indoors. 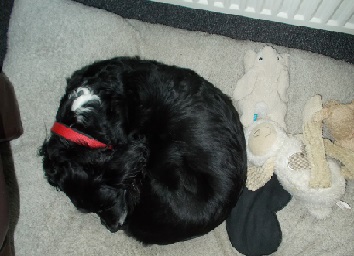 I am a retired number cruncher with a vivid imagination and wacky sense of humour which extends to short stories and poetry. I love to cook and am a bit of a dog whisperer as I get on better with them than people sometimes! We have recently lost our beloved dog Maggie who adopted us as a 7 week old pup in March 2005. We decided to have a photo put on canvas as we had for her predecessor Barney, and now have three pictures of our fur babies on the wall as we found a snapshot of my GSD so had hers done too. From 2014 to 2017 'Home' was a 41 foot narrow boat where we made strong friendships both on and off the water. We were close to nature enjoying swan and duck families for neighbours, and it was a fascinating chapter in our lives. We now reside in a small bungalow on the Lincolnshire coast where we have forged new friendships and interests.
View all posts by pensitivity101 →
This entry was posted in current events, weather and tagged Beast from the East, weather. Bookmark the permalink.

15 Responses to We ain’t goin’ anywhere