There is a lot of memorabilia for Baby’s First Christmas, Baby’s First Birthday etc, which is all very nice if you have a baby.
My babies have all had four legs, and at Christmas, they have all had presents.
Most of the time they don’t know about it, and when the Big Day comes and they are presented with ‘whatever’, they sniff it and take it into their bed.

In the Great Sort Out, most of Maggie’s toys got sent to charity by mistake, so each year we have bought her a little something and at the moment she has three babies of her own.
Last year we weren’t quick enough and she practically pounced on the bag as soon as we got aboard, aware that something inside was for her, and she wanted it there and then.
We made a mistake though by taking the squeaker out, and to see her forlorn little face when she couldn’t get her Baby to talk was just pitiful. We bought her something else later in the year which didn’t have a squeaker at all, so this time we have made sure she can hold a motherly conversation and Baby can answer back.

I guess I got the hint of what she wanted when she dragged me into the pet shops, not nosing around where the dried sausages were, but more the toy rack. She sniffed and poked with her nose, but they were all too hard to reply to her enquiries, so she turned away. I’m sure her shoulders slumped in disappointment. 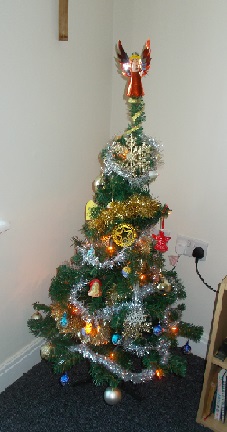 Hubby and I have treated ourselves to a new tree this year, and whilst we were in the shop (without Maggie) we went down to the pet section.
Maggie is smart. She sits in the passenger seat if we go inside without her and watches where we go, so we were glad that the pet area was out of her line of vision at the back of the shop behind walls, rather than glass.
We squeezed and poked, nudged and pinched every toy design on the shelf knowing she has a soft mouth and is so gentle with her toys. We were looking for something that didn’t ‘yelp’, but had a soft squeaker that acted with the minimum of pressure as we have discovered that once Baby has squeaked, Maggie is content and will snuggle up with it against her belly.
We found the perfect thing, a bear designed for puppies.

Apparently the long limbs are for playing tug, but the fabric is soft against young gums and warm to snuggle into.
Getting it in the car without her seeing had people in the car park highly amused as Hubby distracted her whilst I put the tree and the bear in the boot .
At home we gave her biscuits in the lounge so that I could put it in the cupboard in the bedroom.

I remember Christmases past wrapping presents at night and hiding the parcels.
It was bad enough with children and adults, but now we do it for the dog!
Bless her. 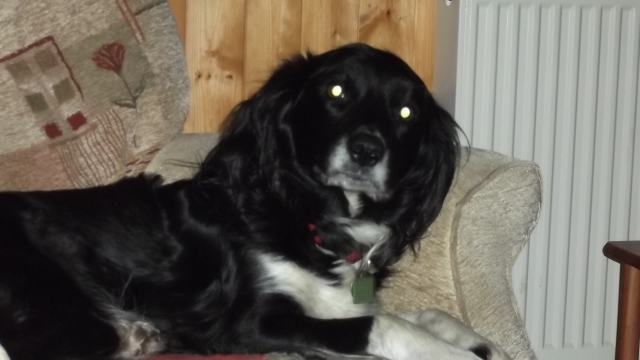 Photo taken in the cottage

I am a retired number cruncher with a vivid imagination and wacky sense of humour which extends to short stories and poetry. I love to cook and am a bit of a dog whisperer as I get on better with them than people sometimes! We have recently lost our beloved dog Maggie who adopted us as a 7 week old pup in March 2005. We decided to have a photo put on canvas as we had for her predecessor Barney, and now have three pictures of our fur babies on the wall as we found a snapshot of my GSD so had hers done too. From 2014 to 2017 'Home' was a 41 foot narrow boat where we made strong friendships both on and off the water. We were close to nature enjoying swan and duck families for neighbours, and it was a fascinating chapter in our lives. We now reside in a small bungalow on the Lincolnshire coast where we have forged new friendships and interests.
View all posts by pensitivity101 →
This entry was posted in animals and pets, current events, diary, Dogs, Family, humour, Maggie and tagged christmas, presents, toys. Bookmark the permalink.