They sure got that wrong!

It was my turn to get up and see to Maggie first thing.
At 6.30 it wasn’t such a bad deal so I put on my joggers and a coat and let her out into the front garden.
It was a bit nippy, but then the forecast had said temperatures were due to drop to a ‘real feel’ of minus 9 at 4am, then rise to between minus 7 and 8 before dipping to minus 9 again around 9am.

Maggie did the deed, eventually, having sniffed every blade of grass to find ‘The One’ to adorn. It was now 6.45 so I went back to bed although Hubby was getting up to start the day. Maggie came too and snuggled up alongside me. Soon we were both giving it Zzzs.

I started to surface just after 8.15 and opened the blind to see what the day had to offer.
The back lawn looked frosted, but Hubby was going ‘Oh Wow!’ all over the place so I padded into the lounge to see what all the excitement was about.

Nowhere on the forecast yesterday (and I checked for the next 24 hours when I looked it up) was there any mention of snow. Not a flurry, not a passing flake, Zilch!
Bearing in mind shortly after we moved in, we were also told that it didn’t snow here.

Right and left of the house at 9am. 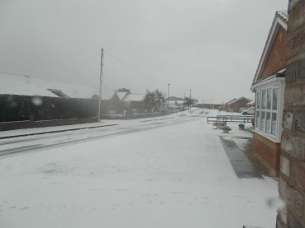 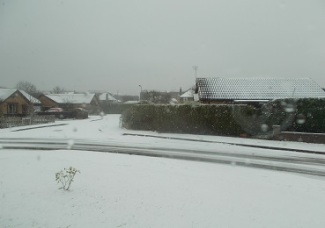 Right and front of the house at 11 am.

It has been snowing all day.
And we went out in it!

I am a retired number cruncher with a vivid imagination and wacky sense of humour which extends to short stories and poetry. I love to cook and am a bit of a dog whisperer as I get on better with them than people sometimes! In November 2020, we lost our beloved Maggie who adopted us as a 7 week old pup in March 2005. We decided to have a photo put on canvas as we had for her predecessor Barney. We now have three pictures of our fur babies on the wall as we found a snapshot of Kizzy, my GSD when Hubby and I first met so had hers done too. On February 24th 2022 we were blessed to find Maya, a 13 week old GSD pup who has made her own place in our hearts. You can follow our training methods, photos and her growth in my blog posts. From 2014 to 2017 'Home' was a 41 foot narrow boat where we made strong friendships both on and off the water. We were close to nature enjoying swan and duck families for neighbours, and it was a fascinating chapter in our lives. We now reside in a small bungalow on the Lincolnshire coast where we have forged new friendships and interests.
View all posts by pensitivity101 →
This entry was posted in current events, diary, weather and tagged snow. Bookmark the permalink.

24 Responses to They sure got that wrong!