A Walk on the White Side

Being Thursday and Market Day, I have taken to getting our stew veg there rather than the offerings from the local supermarkets.
It was snowing but pleasantly warm, and Hubby said now would be a good time to check out the beach and walk into town from there.
Maggie hadn’t had her morning walk yet and taking the car didn’t seem to be that good an idea so that’s what we did.

The flood gate is still closed so we had to go up the ramp and down the other side onto the sand. Maggie was not impressed, especially as it was not how she remembered it.
We’ve renamed it White Sands: 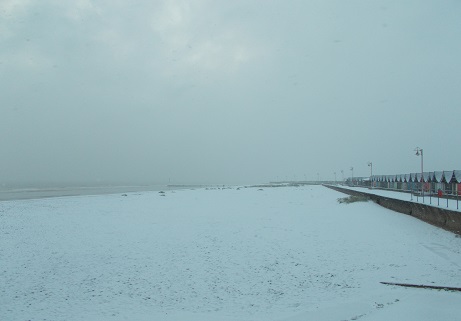 You can just make out the ‘point’ in the distance which is shown clearer below in one of the first pictures I took in that direction when we arrived.

We decided to walk along the beach path into town rather than on the roads, but the wind was blowing in our faces and the snow with it, so we came off the promenade and followed one of the side roads instead. Maggie was off lead most of the time and the snow was still virgin beneath our feet so there were no mishaps.
We got our veg then went into the cafe for a cuppa before walking home. This time we kept to the roads, meeting up with several other walkers who told us that it snowed practically every year but never hung around for long.

Photos: Beach right and left on the ‘Dog restricted’ side 30th November 2017. 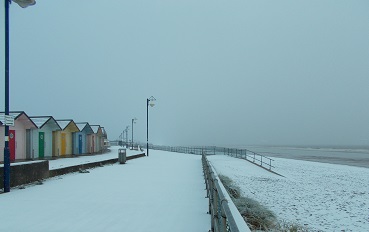 There is something icy falling outside which could well be freezing rain.
The internet weather forecast proudly boasts intermittent showers for the next 64 minutes, and the radar picture has a rather fetching pattern of elongated green balloons along the East Coast.
But snow?
That’ll be a no again (or not).

I am a retired number cruncher with a vivid imagination and wacky sense of humour which extends to short stories and poetry. I love to cook and am a bit of a dog whisperer as I get on better with them than people sometimes! We have recently lost our beloved dog Maggie who adopted us as a 7 week old pup in March 2005. We decided to have a photo put on canvas as we had for her predecessor Barney, and now have three pictures of our fur babies on the wall as we found a snapshot of my GSD so had hers done too. From 2014 to 2017 'Home' was a 41 foot narrow boat where we made strong friendships both on and off the water. We were close to nature enjoying swan and duck families for neighbours, and it was a fascinating chapter in our lives. We now reside in a small bungalow on the Lincolnshire coast where we have forged new friendships and interests.
View all posts by pensitivity101 →
This entry was posted in current events, diary, weather and tagged beach, snow. Bookmark the permalink.

14 Responses to A Walk on the White Side