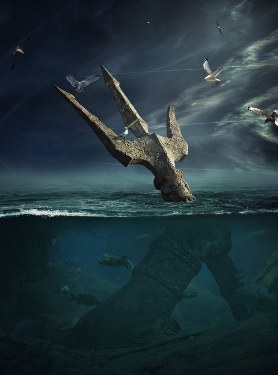 Poseidon was angry, but then he always was, his mood swings were trying at the best of times.
Now, disturbed from his slumber, he intended to unleash his fury from the depths.
Trident raised, he called upon his brothers and sisters to unite in his wrath, to teach these mere mortals a lesson, and show them who was boss.
Hades was toying with fire as usual and having too much fun, whereas Zeus was playing darts with his thunderbolts.
Hestia, the eldest sister, gently told him to keep his temper under control and go back to sleep before he woke the other sisters. The world didn’t deserve annihilation just yet, though in her humble opinion they were working on it.
Pouting, Poseidon sulked back under the waves to his ocean bed.
Just a little ripple, he thought swirling his fist in the water, which by the time it reached land would be a tsunami.

I am a retired number cruncher with a vivid imagination and wacky sense of humour which extends to short stories and poetry. I love to cook and am a bit of a dog whisperer as I get on better with them than people sometimes! We have recently lost our beloved dog Maggie who adopted us as a 7 week old pup in March 2005. We decided to have a photo put on canvas as we had for her predecessor Barney, and now have three pictures of our fur babies on the wall as we found a snapshot of my GSD so had hers done too. From 2014 to 2017 'Home' was a 41 foot narrow boat where we made strong friendships both on and off the water. We were close to nature enjoying swan and duck families for neighbours, and it was a fascinating chapter in our lives. We now reside in a small bungalow on the Lincolnshire coast where we have forged new friendships and interests.
View all posts by pensitivity101 →
This entry was posted in #flash fiction, blogging, Challenge and tagged Mindlovemisery’s Menagerie, photo challenge. Bookmark the permalink.