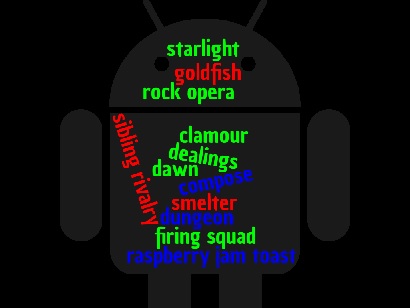 1. raspberry jam toast
2. firing squad
3. sibling rivalry
4. goldfish (the animal)
5. starlight
6. rock opera (i.e. the rock band Queen, The Who or Meatloaf composed songs that had elements of story-telling in the tradition of opera – use this as your point of inspiration to get a feeling for the idea)
7. dungeon
8. compose
9. dealings
10. clamour (n. or v.)
11. dawn
* 12. smelter – bonus points if you can make this into a verb that somehow ties in with your creations

I remember the Rock Opera “Tommy”. I was going through my ‘let’s try something different’ phase, and the boyfriend of the time pushed for us to go. He hated it, whereas I quite enjoyed it.
I’d had a go at composing when it dawned on me that I needed to expand my horizons, but somehow my style was more twinkly starlight compared to dealings of gloomy dungeons or lost souls.
Music had always been a trigger for sibling rivalry though.
For me it had never been a means to clamour for my parents attention, it was just as it was. Sometimes I felt I was facing a firing squad of temper when hours of sheeted practice resulted in very little success whereas for me, one or two hearings and I was playing without music at all.
Mind you, we all had a damn good laugh when my nephew shared his raspberry jam toast with the keyboard thinking it was a huge mouth.

Note:
Sorry, but try as I might I couldn’t (sensibly) get smelter or goldfish into my tale.

I am a retired number cruncher with a vivid imagination and wacky sense of humour which extends to short stories and poetry. I love to cook and am a bit of a dog whisperer as I get on better with them than people sometimes! In November 2020, we lost our beloved Maggie who adopted us as a 7 week old pup in March 2005. We decided to have a photo put on canvas as we had for her predecessor Barney. We now have three pictures of our fur babies on the wall as we found a snapshot of Kizzy, my GSD when Hubby and I first met so had hers done too. On February 24th 2022 we were blessed to find Maya, a 13 week old GSD pup who has made her own place in our hearts. You can follow our training methods, photos and her growth in my blog posts. From 2014 to 2017 'Home' was a 41 foot narrow boat where we made strong friendships both on and off the water. We were close to nature enjoying swan and duck families for neighbours, and it was a fascinating chapter in our lives. We now reside in a small bungalow on the Lincolnshire coast where we have forged new friendships and interests.
View all posts by pensitivity101 →
This entry was posted in blogging, Challenge and tagged Mindlovemisery’s Menagerie, Wordle. Bookmark the permalink.