Music to cry by

There have only been two occasions when my music has made me cry, and today was one of them.

Hubby and I were both awake before 6am, and decided to go and visit my Mum.
We haven’t seen her since the wedding in July what with all our gallivanting about house hunting, so now we are in a position to ‘relax a bit’ and do those little things that have had to take a back seat temporarily.

We were on the road by 7am, and arrived at my sister’s back door shortly after 10 o’clock.
No-one was up, but with the two dogs barking, I saw a body go upstairs, and wondered if we’d been seen.
Five minutes later we were still waiting, so I rang their number and my sister’s boyfriend answered, saying he had seen us and was getting dressed.

He came back downstairs to let us in, and made us a cup of tea. We made small talk until my sister came downstairs, not in a very good mood, despite it being her birthday today. I gave her a token gift (a plaque that read “Wine improves with Age, I improve with Wine” which I thought she might like) and took a cup of tea up to my Mum. 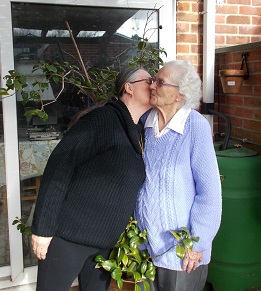 Mum was pleased to see me, and said she’d be down shortly.
Meanwhile, the four of us made more small talk, and I felt very uncomfortable.
My sister has let the house go. The tidiest room in it is my Mum’s which although cluttered, is clean and tidy, and the bed always made.

The boyfriend took her out for a birthday lunch, so we had Mum to ourselves, which was much more relaxed. She was a little confused as to where she’d gone and when she’d be back, but was quite happy to have another cup of tea and some breakfast.
We asked her if she’d like to go out for a drive, and she said yes. Not up to lunch out, Hubby suggested ice cream, so we said we’d go after she’d drunk her tea.
She asked me if I played anymore, and I explained I didn’t have my piano now, though I’d played a baby grand in a local restaurant a little while ago, but my last session had been when we looked after her for the weekend when my sister went away with boyfriend number one.  I asked her if she’d like me to play for her now, and she perked up, so while she drank, I played.

My music has always been a comfort to me. I can express myself and my mood comes across in the way I play my favourite pieces. Today I played some of the golden oldies for my Mum, then ‘her piece’ which is Wind Beneath my Wings.
It was my undoing, and I felt the tears well for all the injustices in life, how things were and how there was little I could do to improve things. As I played the familiar notes, I so wished Mum had agreed to come and live with us all those years ago, but she decided to stay where she was as she felt my sister needed her.

With her tea now drunk, we found the correct pair of shoes and set off for the carvery down the road for our treat. I asked if we could just order dessert without the roast dinner, and the lassie behind the counter said it was fine and we could sit in the bar area.
Three ordinary sundaes arrived, and it was a pleasure to see Mum get stuck in. Afterwards, we went for a short ride just to extend the change of scenery of her being out of the house.
We got back just after 1.15, and I started clearing away dirty crockery.
I washed up, then attacked the sink with cleaner and a scourer, but couldn’t get it clean. I felt the tears threaten again, and Hubby came up to me to ask what I was doing. I could tell he was angry, but not at my Mum. The state of the house is not her fault.

It has been a mixed day.
My Mum is in good health and looking after herself. She knew who we were today, and enjoyed her little outing. My niece was just arriving when we left, so we stopped to chat for a while, so I know Mum was not on her own.
I appreciate my sister is under a lot of pressure. It is not an easy task to care for an elderly parent with dementia and she has done a sterling job. But I find it difficult to accept the sloppy way she is living, particularly as Mum used to do it all anyway.
But then, who am I to question her actions (or lack of them)?
As she’s said before, it’s OK for me, I’m just a visitor.

I am a retired number cruncher with a vivid imagination and wacky sense of humour which extends to short stories and poetry. I love to cook and am a bit of a dog whisperer as I get on better with them than people sometimes! We have recently lost our beloved dog Maggie who adopted us as a 7 week old pup in March 2005. We decided to have a photo put on canvas as we had for her predecessor Barney, and now have three pictures of our fur babies on the wall as we found a snapshot of my GSD so had hers done too. From 2014 to 2017 'Home' was a 41 foot narrow boat where we made strong friendships both on and off the water. We were close to nature enjoying swan and duck families for neighbours, and it was a fascinating chapter in our lives. We now reside in a small bungalow on the Lincolnshire coast where we have forged new friendships and interests.
View all posts by pensitivity101 →
This entry was posted in current events, diary, Family, observations and tagged family, mum, visit. Bookmark the permalink.

14 Responses to Music to cry by