This is our First Line  and photoprompt this week (Thanks Dylan)

Dinah worked whatever job paid the rent, careers were reserved for kids from the suburbs. 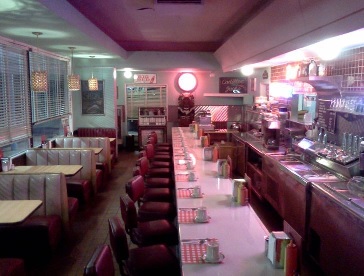 She had never regretted it though. Few could say they had literally worked their way up from waiting tables to being waited on at tables and being paid for it.
No-one recognised her as the skinny waitress from so many years ago.
Much as she had enjoyed those days, she got a different kick out of her job now.
Her role was to visit various diners in The Chain and report on their standards of cleanliness, staff and attitude, and of course the quality of the food served.
None knew when she would be coming. Most never actually noticed, as she didn’t draw attention to herself. She did engage in conversation though, sympathising with the waiting staff run ragged, recognising the banter with regulars and the compassion with some down on their luck.
This establishment was her favourite.
The burgers were big and juicy, cooked to perfection, served in a soft fresh bun, topped with onions, tomatoes, cheese and relish as specifically ordered, the fries piping hot.
The table linens were spotless, the condiment bottles free of sticky dribbles and globs of matted residue. The cutlery shone, not a trace of a water mark, and the crockery holding her black coffee stain-free.
The waiter came across and smiled, knowing this was where she’d started.
‘Hi Nick,’ she said.
‘Hi Mum. Everything OK?’
‘As always, Son, as always.’

I am a retired number cruncher with a vivid imagination and wacky sense of humour which extends to short stories and poetry. I love to cook and am a bit of a dog whisperer as I get on better with them than people sometimes! We have an elderly dog called Maggie who adopted us as a 7 week old pup in March 2005. From 2014 to 2017 'Home' was a 41 foot narrow boat where we made strong friendships both on and off the water. We were close to nature enjoying swan and duck families for neighbours, and it was a fascinating chapter in our lives. We now reside in a small bungalow on the Lincolnshire coast where we have forged new friendships and interests.
View all posts by pensitivity101 →
This entry was posted in blogging, Challenge, photoprompt and tagged #first line friday, Mindlovemisery’s Menagerie, short fiction.. Bookmark the permalink.