One of the reasons we found ourselves on the boat was because we got priced out of the property market three years ago.
In all honesty, most house prices are still way beyond us, but throughout the country there are little pockets of hope and reason that we can explore.

Whilst we are limited with our spending power, we have a few things in our favour in that we have nothing to sell, are cash buyers and not reliant on a mortgage, not restricted for schools, jobs or family plus we can move quickly (or as quickly as the legal eagles can work on our behalf).

It is however imperative that wherever we buy has good health care facilities, we can access a good route/be within a two hour drive of the breast clinic for continuance of care with my cancer treatment follow-ups, and we are not literally in the middle of nowhere.

That latter statement is such a shame as a fabulous log cabin (not a holiday home!) is in our price range, and we both drooled over it.
Having the traditional log burner within, fully fitted bathroom and kitchen, oil heating and more or less set in its own nature reserve, if we were thirty years younger and more mobile, we would not hesitate and be moving in before the ink was dry.
Sadly we are not as young or as fit as we were, and have to be practical, both with our approach and our selection.

In the past we used the internet in our search, and discovered a lot of discrepancies in particulars and the actual properties concerned. This included houses that hadn’t been built yet, were already sold subject to contract, had been withdrawn, and in two instances, were not on the market in the first place with the advertising agents.
We soon became very disillusioned when properties we were able to view were simply not ‘as it said on the tin’.

Since putting the boat on brokerage, we have not exactly been sitting on our laurels, and with three of us looking on separate computers, we have found considerably more properties than we originally anticipated.
We have discarded the initial price carrot on new builds as they are nearly all shared ownership, some by as little as just 25%.
Similarly is a lifelong lease, where you buy at a discounted price, but will never actually own your home.

We have now made a short list of what we are looking for, and have four properties of real interest to view. We are making appointments for next week.
It will be something like a 300 mile round trip in one day, but hopefully our homework and groundwork will pay off this time.
We won’t be able to afford a property like this 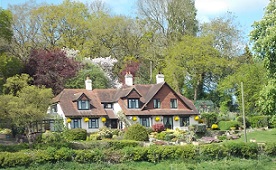 I am a retired number cruncher with a vivid imagination and wacky sense of humour which extends to short stories and poetry. I love to cook and am a bit of a dog whisperer as I get on better with them than people sometimes! We have recently lost our beloved dog Maggie who adopted us as a 7 week old pup in March 2005. We decided to have a photo put on canvas as we had for her predecessor Barney, and now have three pictures of our fur babies on the wall as we found a snapshot of my GSD so had hers done too. From 2014 to 2017 'Home' was a 41 foot narrow boat where we made strong friendships both on and off the water. We were close to nature enjoying swan and duck families for neighbours, and it was a fascinating chapter in our lives. We now reside in a small bungalow on the Lincolnshire coast where we have forged new friendships and interests.
View all posts by pensitivity101 →
This entry was posted in current events, diary, house hunting and tagged availability, property market. Bookmark the permalink.

14 Responses to Preparing the way