Thanks Michael. Lovely image this week!
If you wish to participate in this week’s Tale Weaver Challenge, you can check it out here.
https://wordpress.com/read/feeds/19271780/posts/1494995334

It started as a childish pastime, first talking to the trees, then pretending there were fairies at the bottom of the garden.
The adults were right of course when they said there weren’t any.

They weren’t fairies at all.
They were her friends, her guardians, her kindred spirits, and although she didn’t realise it then, they presented time:
Past, Present and Future.

A lonely child, she’d always felt happiest in the forest.
The trees provided protection from the elements, and a hiding place for her friends.
Unlike her, they didn’t age, and could take the form of anything should outsiders pass by.
Her favourite were the butterflies, such a vibrant blue yet whose existence was never questioned.

After her parents died, they continued in their vigilance to protect her, keeping her from harm. They became her mentors and confidantes, caring for her in times of sorrow, distress or confusion.
She never married, had never wanted to, and was content with her life.

It wasn’t until her twilight years that everything became clear when they manifested themselves in their true form and welcomed her into their world.
Crossing over was painless as she became one of them, flitting in the forest waiting until a lonely child sat under the trees and marvelled at the beautiful butterflies. 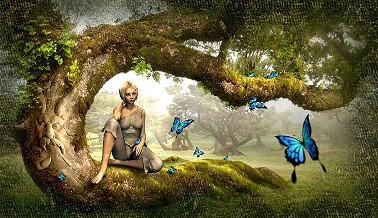 I am a retired number cruncher with a vivid imagination and wacky sense of humour which extends to short stories and poetry. I love to cook and am a bit of a dog whisperer as I get on better with them than people sometimes! In November 2020, we lost our beloved Maggie who adopted us as a 7 week old pup in March 2005. We decided to have a photo put on canvas as we had for her predecessor Barney. We now have three pictures of our fur babies on the wall as we found a snapshot of Kizzy, my GSD when Hubby and I first met so had hers done too. On February 24th 2022 we were blessed to find Maya, a 13 week old GSD pup who has made her own place in our hearts. You can follow our training methods, photos and her growth in my blog posts. From 2014 to 2017 'Home' was a 41 foot narrow boat where we made strong friendships both on and off the water. We were close to nature enjoying swan and duck families for neighbours, and it was a fascinating chapter in our lives. We now reside in a small bungalow on the Lincolnshire coast where we have forged new friendships and interests.
View all posts by pensitivity101 →
This entry was posted in blogging, Challenge and tagged Mindlovemisery’s Menagerie, tale weaver 124. Bookmark the permalink.