It’s my Mum’s birthday on Monday, and I’d hoped to get down to see her towards the weekend as we hadn’t seen her for a while and the card I’d made was rather fat to post. 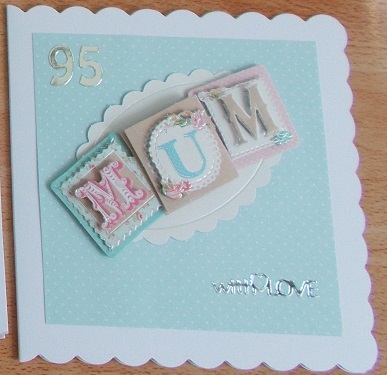 The last time we visited was in March when SIL was over from NZ. That was a happy day and Mum was in good spirits.

We had a window today as our dentist appointments were cancelled due to sickness, so we plotted our route with Hubby’s new toy and set off just before 9am.
It reduced our journey by twenty miles and almost an hour as we avoided the motorways which tend to boomerang round from point A to point B. This was a better route, though coming back we did a slight detour due  to an accident that had literally just happened on the A346 we were on, so were able to get out of the tailback before it started.

My Mum finally agreed to go into Respite for a week and came back on Sunday. She had enjoyed herself and by all accounts was treated like a queen and well looked after. She is looking forward to the next time, which is excellent news.
Sadly, dementia is taking a bigger hold and we noticed a considerable deterioration since our visit a couple of months ago.
Mum was reading one of my letters when we arrived, though this week’s will not get there until tomorrow. She said it was dated the 21st…………. of February, but thought it was the most recent. I’m glad she keeps them.
She is dozing most of the day and therefore not sleeping at night, tending to get up and walk around, lost and confused. My sister is doing her best but obviously not sleeping either, and today she looked drained.

It is such a sad situation, as there is nothing anyone can do to makes things better or change the inevitable. Also, nothing we could have done in previous years would have made a difference, and no-one can be held accountable for the way things are.
All we can do is visit as often as we can, and I shall continue writing every week.

We have a family wedding coming up in a couple of months, so all being well, Mum will be looking forward to that. We shall hopefully be able to take some of the pressure off my sister for the event and look after Mum for the duration.
Our visits are becoming more precious.

I am a retired number cruncher with a vivid imagination and wacky sense of humour which extends to short stories and poetry. I love to cook and am a bit of a dog whisperer as I get on better with them than people sometimes! We have recently lost our beloved dog Maggie who adopted us as a 7 week old pup in March 2005. We decided to have a photo put on canvas as we had for her predecessor Barney, and now have three pictures of our fur babies on the wall as we found a snapshot of my GSD so had hers done too. From 2014 to 2017 'Home' was a 41 foot narrow boat where we made strong friendships both on and off the water. We were close to nature enjoying swan and duck families for neighbours, and it was a fascinating chapter in our lives. We now reside in a small bungalow on the Lincolnshire coast where we have forged new friendships and interests.
View all posts by pensitivity101 →
This entry was posted in card making, Family, Relationships and tagged family, mum. Bookmark the permalink.

7 Responses to Seizing the Moment