We’re here, berthed at the top of Hatton Flight Lock Number 46 where you can have 48 hours free mooring. 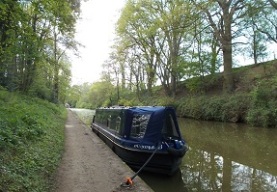 It’s the Big Challenge and time to show the world what we’re made of.
Or at least that was the plan!

We were up early and decided to have a browse of the first couple of locks to get a feel of what was to come. Our friend was meeting us at 9.30, and we had sent him a message the night before to invite him for a full cooked breakfast at the Cafe here.
We noticed someone opening up all the paddles and thought they were coming through early on their own and preparing a few locks in advance.
This was not the case as we discovered one of the holding pounds inbetween locks was empty, revealing a mass of gooey mud! It made us glad we hadn’t started off early on our own as we would have been stuck good and proper in the lock after having the necessary panic and Oh Sh1t moment being unable to enter an empty basin.

The above images are from google as we were concentrating on getting down!

It only took half an hour or so for the pound to fill. Apparently someone had left a gate open and the water had just drained away.

By the time the three of us were well fed and watered with an excellent breakfast, it was 10am.
Hubby was on tiller duty whilst our friend and I were operating the locks.
We started our descent at 10.21.

It was an experience.
There are 21 locks in the flight dropping 146 feet into the valley over a distance of 2½ miles.
We walked.
And got into a rhythm.
One of us prepared the lock, Hubby went in, both of us operated the gates and paddles while he was inside, then one went on to the next as Hubby came out and the other closed the gates.
We seemed to be the first ones going down and didn’t meet anyone coming up until we were halfway.
‘The Dip’ proved to be the best method for me, and although I’ve toned up, I haven’t lost those flabby chicken wings I’d hoped to. I found it funny how many people pay hundreds of pounds a year to belong to a gym when this was one of the best workouts ever.
There are a string of volunteers and the people you meet are terrific, from runners to dogwalkers to boaters and helpers.

We were out of the final lock (number 26) at 13.50 and stopped for a well deserved cup of tea and biscuits. It had taken us three and a half hours, but only two of those were actual lock time, the remainder being the walk in between.
Our friend then had the walk back up to his car, but he was quite content as he loves to do the flight and we were certainly appreciative of his help.

Wildlife on the canal was similar to that on the river, with new clutches of ducklings finding their water wings. It was hysterical to watch these young babies running on the water as their little feet paddled like crazy to keep up with Mum. We saw several broods of well over a dozen. Swans and geese are still sitting on eggs, but there are always casualties and Hubby pulled a dead badger out of one lock and another on the canal.

I am a retired number cruncher with a vivid imagination and wacky sense of humour which extends to short stories and poetry. I love to cook and am a bit of a dog whisperer as I get on better with them than people sometimes! In November 2020, we lost our beloved Maggie who adopted us as a 7 week old pup in March 2005. We decided to have a photo put on canvas as we had for her predecessor Barney. We now have three pictures of our fur babies on the wall as we found a snapshot of Kizzy, my GSD when Hubby and I first met so had hers done too. On February 24th 2022 we were blessed to find Maya, a 13 week old GSD pup who has made her own place in our hearts. You can follow our training methods, photos and her growth in my blog posts. From 2014 to 2017 'Home' was a 41 foot narrow boat where we made strong friendships both on and off the water. We were close to nature enjoying swan and duck families for neighbours, and it was a fascinating chapter in our lives. We now reside in a small bungalow on the Lincolnshire coast where we have forged new friendships and interests.
View all posts by pensitivity101 →
This entry was posted in change, current events, diary, narrow boat, Voyages and tagged final boat trip. Bookmark the permalink.