Our journey yesterday had taken us over an aqueduct….. our first. 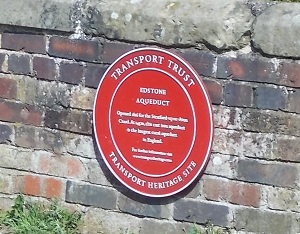 We don’t know what we were expecting, but to be honest we were a little disappointed. 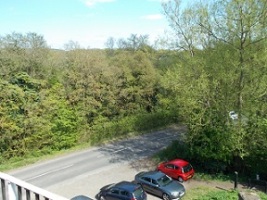 The view was probably more interesting from below, seeing a boat going over your head!

Our day started at 7.25 with 261.2 hr on the engine clock.
Bridges 48 and 47a are very close together and the angle to get through them tight.
Lock number 38 was the beginning of another mini flight and was immediately after bridge 47. I couldn’t signal Hubby at all as I had to cross the road to access the lock and the wall of the bridge was directly in my line of sight.
We passed an interesting copse of dead wood before hitting our second aqueduct.

The view was better this time. 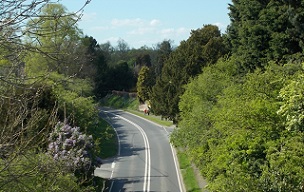 The canals are quite picturesque in places, but the narrowness of the locks was daunting at times and we think we preferred the river!
Some of the paddles were out of commission on one side coming out of the lock and the gates were a little stiff. However, with the boat’s gentle nudging help, we had no problems at all and were through them in just a few minutes, even if we had to empty them first! 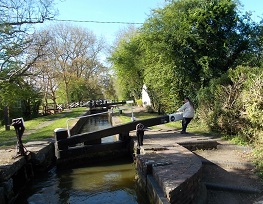 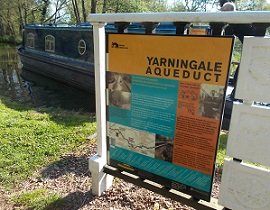 Locks 27 to 2 are the Lapworth flight of locks, but we were turning off at number 22 to get on to the Grand Union. However, we still had to start at the bottom! 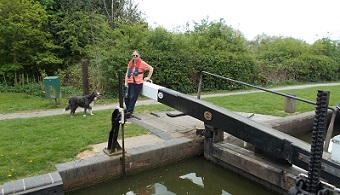 Meet Carr, doggie guardian of lock 22, and woe betide you if you don’t throw the stick presented. He was unbelievably 10 and as agile and bright as a puppy of as many months.
His mannerism reminded us both of our Barney, Maggie’s predecessor.

We had been told of a ‘cut through’ to save time and a couple of locks here. We couldn’t actually see it until we were almost upon it. Hubby maneuvered the boat perfectly and I held my breath all the way! 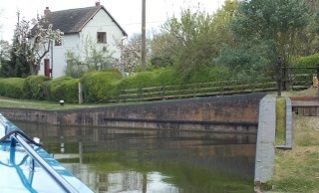 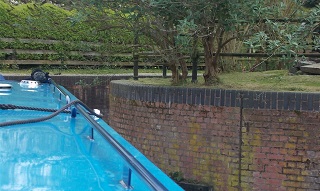 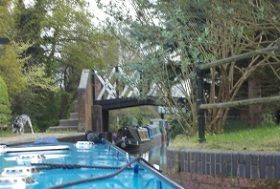 Welcome to the Lapworth Link at Kingswood Junction. 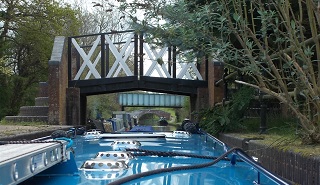 And then we were turning right on to the Grand Union.

We stopped for lunch and I cooked curry whilst Hubby checked the boat for any ‘battle damage’ as he washed it. He was relieved there was very little and the mud washed off quite easily!
Our day wasn’t finished though as we wanted to be at the Hatton Flight in readiness to meet our friend who had offered to give us a hand in the morning. There were no more locks between our entry here and the top lock, but we did have a variety of low bridges and the Shrewley Tunnel to get through first.
My pictures inside didn’t come out so I missed out on the stalactite and stalagmite formations, but I did get a couple of shots going in and coming out.

I got these from google. There is no towpath through the tunnel and originally the boats were pulled along using the chains hanging along the inside wall. Horses were led through the smaller tunnel running alongside.

Hubby and I both got soaked as the tunnel is extremely leaky, we weren’t wearing our waterproofs and didn’t have our canopy up. However, we had another first using our tunnel lights as we went through it. Hurrah!

We arrived at Hatton at 16.50 with 268.5 hrs on the engine clock.
Despite doing 17 locks, I didn’t sleep as well, but at least I wasn’t stiff and had had plenty of flight practice so far ready for The Big One tomorrow!

I am a retired number cruncher with a vivid imagination and wacky sense of humour which extends to short stories and poetry. I love to cook and am a bit of a dog whisperer as I get on better with them than people sometimes! We have an elderly dog called Maggie who adopted us as a 7 week old pup in March 2005. From 2014 to 2017 'Home' was a 41 foot narrow boat where we made strong friendships both on and off the water. We were close to nature enjoying swan and duck families for neighbours, and it was a fascinating chapter in our lives. We now reside in a small bungalow on the Lincolnshire coast where we have forged new friendships and interests.
View all posts by pensitivity101 →
This entry was posted in change, current events, diary, narrow boat, Voyages and tagged final boat trip. Bookmark the permalink.