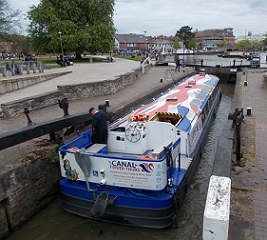 It’s a wide lock to suit the various commercial widebeams, but the gates backing onto the river where we were tend not to close, so it is not uncommon to rope in the assistance of passersby to lean against them whilst you go up to the other end to raise the paddles to lock up. Most are happy to oblige seeing it as a bonus to their holiday.
However, at 6.30 in the morning, there are not many people about, so we were really grateful to Ron our new American friend who, being an early riser himself, had been listening out for us to give us a hand.
Our plan was to stop around bridge number 60 on the map, so a total of about 16 locks. Ron and his wife Betsy were planning to set off later in the day and complete 30 locks as they were touring the Avon Ring, so it was quite likely they would pass us.
Unlike the river locks, travelling in tandem would not work as the canal locks can only take one boat at a time, and are not long enough to have one sit behind the other.

To get out of the basin on to the canal, you have to take the boat under the road.
This is the view as we were coming out.
We decided to take the canopy and pram frame off altogether as we knew there were several low bridges and it would be pointless and time consuming to put it up, take it down, put it up again all the time. The weather was pretty good and we had our waterproofs so weren’t afraid of a bit of rain. 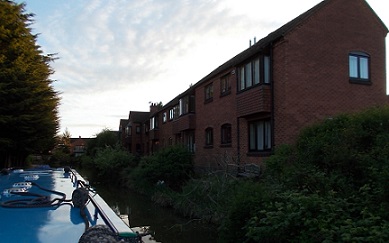 The canal backs onto houses and the locks started more or less straight away.
Being narrow locks, there is only one gate but there may be a paddle on either side.
On lock 53 I could not shift it and had to ask a walker to help me. Between the two of us we finally managed but it had taken all my energy and I had doubts about doing many more.

We passed the hotel where our Friday visitors were staying, and he was walking towards us.  He helped with the next lock and it was upsetting that Hubby fished a dead puppy out of the water. It wasn’t a new-born, probably four or five weeks old, but once animals fall in, there is no way they can get out unattended so they swim until they are exhausted and then drown.
We gave him a lift to the next bridge and he walked back, not bad for a guy in his 80s.

We had a taste of our first flight (locks 55-52) and it was hard going. However, the more locks I did, the better I coped. We remembered to duck under the bridges and Hubby guided the boat in without touching the sides. We have been given loads of tips since we got the boat, and taking things slowly is probably the most important! 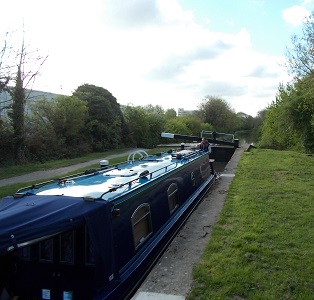 There is a major flight (locks 50-40) and we nearly came a cropper through the second.
A lady came rushing up with her windlass and told me the top gate was open. I hadn’t noticed and so the water was just rushing down through the lock unchecked as I opened the paddle.
Ann and her husband Martin were old hands and we learnt some valuable tips on going through canal locks which paid off in spades.
Ann showed me ‘The Dip’ to open the gates, which is a squat almost in a sitting position so that you can pull the gate towards you. On the river, it is easier to get your backside against the gate and push, but I found ‘dipping’ so much better and in fact quicker.
Martin suggested to Hubby about sitting back in the lock using the boat to keep the gate closed which also took the strain off hanging on to the ropes.
We let them go ahead and had a couple of trial runs after Hubby had to adjust a bolt that had come loose on the tiller.

We progressed at our own speed and developed our own technique, only once forgetting to close the paddle and wondering why the lock didn’t fill!
We met up with a boat coming down and the girl was a bit too eager, opening up the paddle in a rush before we were ready so I had to shout at her to slow it down!
After that, we continued to climb and with our newfound knowledge, Hubby could leave the boat in the lock and operate the second paddle, then as the water was balancing out ready to move the gate, the boat came gently up alongside under her own power, and Hubby could walk her out closing the gate whilst I prepared the next lock.

The above are at the top of the Stratford Flight.
These below give you an idea of how tight a squeeze it can be under bridges! 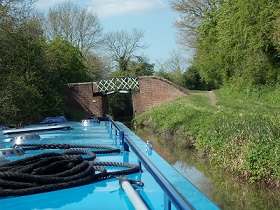 We stopped for the night at Bridge 48 at Preston Bagot Bottom having completed 18 locks. We had a light evening meal, and I slept for 12 hours!

I am a retired number cruncher with a vivid imagination and wacky sense of humour which extends to short stories and poetry. I love to cook and am a bit of a dog whisperer as I get on better with them than people sometimes! We have an elderly dog called Maggie who adopted us as a 7 week old pup in March 2005. From 2014 to 2017 'Home' was a 41 foot narrow boat where we made strong friendships both on and off the water. We were close to nature enjoying swan and duck families for neighbours, and it was a fascinating chapter in our lives. We now reside in a small bungalow on the Lincolnshire coast where we have forged new friendships and interests.
View all posts by pensitivity101 →
This entry was posted in change, current events, diary, narrow boat, Voyages and tagged final boat trip. Bookmark the permalink.