I started this post around 2.15 this morning, then deleted what I’d written and returned to bed.
Trying to get to the publish stage now has been a nightmare of connections lost, no signal, no internet and limited service.

Once again, Maggie has got us up in the night and we have no idea why. It is draining us both, but last night brought forth an added concern for a fellow boater who was seen sitting in his car after ‘having a few’ but not wishing to return to his boat.

He’s been here for over 23 years, having lived aboard his boat for 27. He is one of the residents majorly affected by the increase having to find over £2000 a year extra to stay. He’s not, and has found an alternative mooring where he is well known from past work, once his current contract expires in a couple of months.
He is not a well man anyway, having been in hospital three times in as many weeks with severe asthma attacks, which is obviously enhanced by the stress and strain of current events.

After walking her ladyship at 1.30, Hubby came back to the boat to fetch me, as I am a good listener and people talk to me, about anything.
We returned to his car, but he was nowhere to be seen, and we were anxious being aware of his current physical state and depressed state of mind.
We checked the marina site with torches, checked the showers in case he’d been taken ill, and then walked down to his boat to see if he had gone home.
Once satisfied he was indeed aboard in warmth and safety, we came back to our boat, had a cup of tea, and then returned to bed.

I couldn’t sleep.
My mind was going nineteen to the dozen about everything, anything and nothing, so after half an hour, I got up leaving Hubby snuggled under the duvet.
Maggie came and settled down beside me on the bench, and I put some figures down on paper that had been spinning through my head.
The worse case scenario is that with just our work pensions coming in, it’s not good and we have to sell the boat. We both agree on that, though it goes so much against the grain because it is not of our doing or our choice. 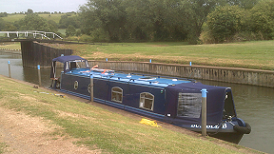 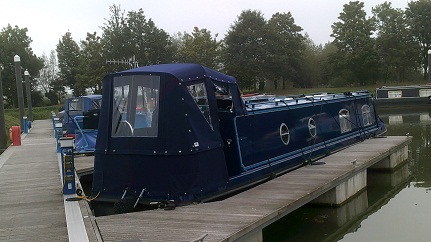 If we are left alone with the present financial status quo, we will be fine, can keep the boat and the car, but have no intention whatsoever of staying here. We will need to find a temporary mooring for the winter months with electricity, water, sewage disposal and showers, plus a laundry in close proximity until we can plan our next move.
All is not as bleak as it sounds though, as we do have options and alternatives, fingers in pies, and irons in fires etc.

I am a retired number cruncher with a vivid imagination and wacky sense of humour which extends to short stories and poetry. I love to cook and am a bit of a dog whisperer as I get on better with them than people sometimes! In November 2020, we lost our beloved Maggie who adopted us as a 7 week old pup in March 2005. We decided to have a photo put on canvas as we had for her predecessor Barney. We now have three pictures of our fur babies on the wall as we found a snapshot of Kizzy, my GSD when Hubby and I first met so had hers done too. On February 24th 2022 we were blessed to find Maya, a 13 week old GSD pup who has made her own place in our hearts. You can follow our training methods, photos and her growth in my blog posts. From 2014 to 2017 'Home' was a 41 foot narrow boat where we made strong friendships both on and off the water. We were close to nature enjoying swan and duck families for neighbours, and it was a fascinating chapter in our lives. We now reside in a small bungalow on the Lincolnshire coast where we have forged new friendships and interests.
View all posts by pensitivity101 →
This entry was posted in diary, Dogs, fears and phobias, Just a thought, miscellaneous, narrow boat, Personal Thoughts and tagged concerns, insomnia, My life, worries. Bookmark the permalink.

9 Responses to The Early Hours