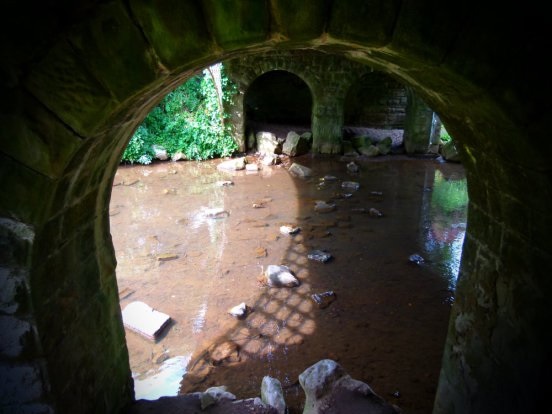 The colour reminded her of raspberry blancmange, but there pleasant similarity ended.
These murky waters were strewn with rubbish, rotting food, even an old mattress.
The River Dummer bore a revised sign, an ‘m’ having been replaced with PST by a crude hand.
Government cutbacks had led to reduced waste collections which only increased fly tipping, so now local rivers were awash with trash, scenic streams conveyor belts of waste, and picturesque bridges like this an eyesore.
Gone were the ducks and swans she used to feed as a child, gone too were the small fish, newts, tadpoles and toads, and in their place uncaring decay ate away at the river bank.
Time for change.

As Mayor, she called a meeting at the Town Hall.
She recognised families, friends, work colleagues, shop owners, bankers, even the snooty librarian had put in an appearance. In fact, no-one had stayed away, all wanting to hear what she had to say.
Her ideas were met with mixed reviews, but overall, everyone wanted to play a part in cleaning up their town.
A local skip firm offered free hire for a weekend to clear the river.
The youth hostel said they would send along a gang to help load it.
Mrs Jenkins the baker said she’d provide coffee and cake for the workers.
A builder said he would help repair the brickwork on the bridge in his spare time, together with his three sons who were learning the trade.
A new sign replacing the defaced River Dummer appeared, no-one knew from where, or who had done the beautiful artwork.

It was a start.
They had six months before the judges visited for the Village in Bloom competition, and already excited wannabe gardeners were cultivating shrubs and bulbs to put in planters donated by a DIY centre which were old stock and wouldn’t sell. The woman running the evening arts and crafts class had some ideas of her own about those!

I am a retired number cruncher with a vivid imagination and wacky sense of humour which extends to short stories and poetry. I love to cook and am a bit of a dog whisperer as I get on better with them than people sometimes! In November 2020, we lost our beloved Maggie who adopted us as a 7 week old pup in March 2005. We decided to have a photo put on canvas as we had for her predecessor Barney. We now have three pictures of our fur babies on the wall as we found a snapshot of Kizzy, my GSD when Hubby and I first met so had hers done too. On February 24th 2022 we were blessed to find Maya, a 13 week old GSD pup who has made her own place in our hearts. You can follow our training methods, photos and her growth in my blog posts. From 2014 to 2017 'Home' was a 41 foot narrow boat where we made strong friendships both on and off the water. We were close to nature enjoying swan and duck families for neighbours, and it was a fascinating chapter in our lives. We now reside in a small bungalow on the Lincolnshire coast where we have forged new friendships and interests.
View all posts by pensitivity101 →
This entry was posted in blogging, Challenge and tagged #write photo bridge. Bookmark the permalink.