I have only done the RSPB garden watch here once, but that doesn’t mean I don’t notice our feathered friends around us.
This past weekend was wet, windy and cold, so the thought of sitting in the car with a restricted view for an hour didn’t appeal, and looking out of our windows would have given me even less of an area to scan.
Saying that though, when I participated in January 2015, I’d seen my first ever bullfinch (google image here).

Since then, I have been blessed to see swallows close up (my pictures)

a kingfisher (my pictures) 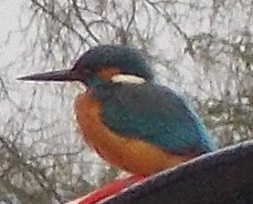 as well as ducks, geese, moorhens, egyptian geese/ducks, cormorants, herons and these
four cygnets which I snapped today 1st February 2017.

Hubby and I were walking back from town one day a little while ago and saw a bird we had never seen before.
It was about the size of a blackbird or song thrush, but had a red flash on its side and a white flash across its eye.
Looking it up, I discovered it was a Redwing (google images here).

Aren’t they beautiful?
Walking around the Avenue a few days later, we saw at least ten of them on the green.
And speaking of green, we also have a green woodpecker making the rounds at the bottom of the dog walk (another google image here).

All this in my own ‘back garden’.

I am a retired number cruncher with a vivid imagination and wacky sense of humour which extends to short stories and poetry. I love to cook and am a bit of a dog whisperer as I get on better with them than people sometimes! We have recently lost our beloved dog Maggie who adopted us as a 7 week old pup in March 2005. We decided to have a photo put on canvas as we had for her predecessor Barney, and now have three pictures of our fur babies on the wall as we found a snapshot of my GSD so had hers done too. From 2014 to 2017 'Home' was a 41 foot narrow boat where we made strong friendships both on and off the water. We were close to nature enjoying swan and duck families for neighbours, and it was a fascinating chapter in our lives. We now reside in a small bungalow on the Lincolnshire coast where we have forged new friendships and interests.
View all posts by pensitivity101 →
This entry was posted in diary, life afloat, lifestyle, Marina, My life, nature, observations, swans and tagged birds, marina. Bookmark the permalink.