The Menopause-in-a-Box sucks.
I was beginning to hope that as with some medications, the body gets used to it and calms down without too much protest.
I should have known better, and not got sucked into a false sense of security at night.

I’ve had plenty of practice going red in the face. Easily embarrassed as a child (and adult too come to think of it), blushing scarlet wasn’t all down to the heat of the room. 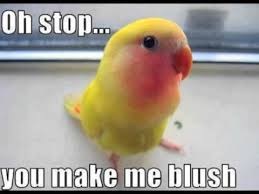 Anytime attention was on me, whoosh! Feel the heat and get the eggs out for frying.
In my thirties, I was checked out for an early menopause, and although the tests came back negative, hot flushes were the norm and I just accepted them as part of my life.

The anti oestrogen medication I’m on has a long list of possible side effects, hot flushes being one of them. 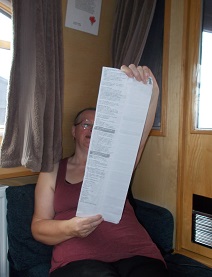 Now there are sweet little blushes (pink cheeks), full-scale flushes (see above), and the plushiness of making oneself comfortable in the all-exclusive heat emitting duvet on my side of the bed, aka Rent-a-Furnace.

Last night was the worst, and the first time I can recall ever having horrendous sweats as well.
This does not bode well in these colder months when one is living in a metal cigar tube where condensation is a major problem in the first place.

I threw off the duvet to expose the top half of me in the hope of cooling down as the temperature outside dropped because the rain on the roof sounded more like icy sleet. Making sure Hubby was neatly tucked in, I tried to get comfy.
Fat chance.
The lower half of me was cooking well too by now, so I gently cycled my legs up past the dog so that my knees were facing the roof above the duvet and hoped sleep would come.
With my knee playing up and in full competition with my power surge, even fatter chance.
Poor dog was also beginning to overheat, so she got off the bed and went down the other end of the boat where things were cooler.

Hubby was also restless, and it wasn’t because of me.
He has his own leg pain problems and cold damp weather is the worst for him, so at 3.30 he got up to take some pain killers. This woke him up too much so he got dressed, settled down with the dog and blogged until the pill kicked in and he started to feel sleepy again.

Meanwhile in ‘the oven’, whilst one’s crumpets aren’t exactly burning, they are starting to roast well, and that nice little one-sided tan has darkened a couple of shades.
Hubby came back to bed around 5 am, and was cool enough to diffuse the boiling pot that was me so I managed to get back to sleep.

The pair of us headed for the showers in tandem this morning, he to get some heat on his legs to assist his poor circulation, and me to wash away the sweaty residue of my unwanted blanket bath.
Saunas help with weight loss I believe, so I hope I’ve been given a head start this week.

I am a retired number cruncher with a vivid imagination and wacky sense of humour which extends to short stories and poetry. I love to cook and am a bit of a dog whisperer as I get on better with them than people sometimes! In November 2020, we lost our beloved Maggie who adopted us as a 7 week old pup in March 2005. We decided to have a photo put on canvas as we had for her predecessor Barney. We now have three pictures of our fur babies on the wall as we found a snapshot of Kizzy, my GSD when Hubby and I first met so had hers done too. On February 24th 2022 we were blessed to find Maya, a 13 week old GSD pup who has made her own place in our hearts. You can follow our training methods, photos and her growth in my blog posts. From 2014 to 2017 'Home' was a 41 foot narrow boat where we made strong friendships both on and off the water. We were close to nature enjoying swan and duck families for neighbours, and it was a fascinating chapter in our lives. We now reside in a small bungalow on the Lincolnshire coast where we have forged new friendships and interests.
View all posts by pensitivity101 →
This entry was posted in diary, health, humour, Just a thought and tagged medication side effects. Bookmark the permalink.

12 Responses to Flush, Blush or Plush?