OK, I know it’s Wednesday, but I was busy yesterday!
Here’s another of my recently found challenges, this one from jansenphoto, Dutch goes the Photo
https://wordpress.com/read/feeds/43011194/posts/1310557891

With the offer of using our own image for a post, I came up with this as it’s a bit of a mystery. 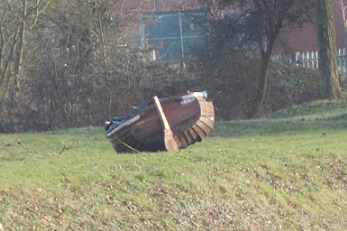 Naturally it’s not surprising to see boats in a marina.
We have a good variety of cruisers, widebeams and narrow boats of various lengths, all of which are crammed into our basin at the moment whilst work is carried out on the other.

I noticed this little rowing boat beached on the dog walk a few days ago.
How it got there and who it belongs to is unclear, as we haven’t had any high water recently and there appears to be no drag lines for it to have been pulled out of the basin into its current position. In fact, I haven’t seen any other boat with one like this attached to the back, and I tend to notice things like that. Inflatable dinghies yes, canoes yes, even a pushbike or two on board, but a rowing boat? That’ll be a No. 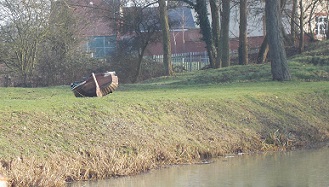 Way before we arrived here, the water levels reached the highest ever, recorded on 22nd July 2007 at 5.50m. There is a mark on the garage wall over the road, and boats were ‘moored’ in some very interesting places (like open fields and high tree tops) up and down the river.
Abandon ship in these circumstances was purely because there was too much water on the outside surrounding the boat, not because they were sinking.

I am a retired number cruncher with a vivid imagination and wacky sense of humour which extends to short stories and poetry. I love to cook and am a bit of a dog whisperer as I get on better with them than people sometimes! We have recently lost our beloved dog Maggie who adopted us as a 7 week old pup in March 2005. We decided to have a photo put on canvas as we had for her predecessor Barney, and now have three pictures of our fur babies on the wall as we found a snapshot of my GSD so had hers done too. From 2014 to 2017 'Home' was a 41 foot narrow boat where we made strong friendships both on and off the water. We were close to nature enjoying swan and duck families for neighbours, and it was a fascinating chapter in our lives. We now reside in a small bungalow on the Lincolnshire coast where we have forged new friendships and interests.
View all posts by pensitivity101 →
This entry was posted in blogging, Challenge, Photos and tagged fpj-photo-challenge, TPC. Bookmark the permalink.