January 19, 2017 prompt: In 99 words (no more, no less) write a about a quarry. It can be a place or include the by-product. The quarry can be operational, abandoned, it can be in real-tie or mentioned from another time. Where will the quarry take you? Go where the prompt leads.

We used to take the dogs to the local quarry every day.
They loved it, could run for miles in perfect safety, the most threatening thing likely to be a scared rabbit.
That was 20 years ago.
Some wiseass got the idea he could make a fortune by developing the land into a theme park and holiday resort.
Work started within six months of sale.
And stopped before the end of the seventh.
Now it lays a shambles of overgrown brambles and pot holes, dangerous, even in daylight.
No wildlife at all, not even crows in the granite rock face. 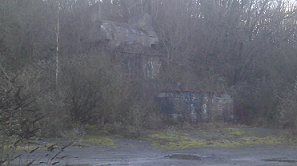 Pictures of our quarry taken in 2015.

I am a retired number cruncher with a vivid imagination and wacky sense of humour which extends to short stories and poetry. I love to cook and am a bit of a dog whisperer as I get on better with them than people sometimes! We have recently lost our beloved dog Maggie who adopted us as a 7 week old pup in March 2005. We decided to have a photo put on canvas as we had for her predecessor Barney, and now have three pictures of our fur babies on the wall as we found a snapshot of my GSD so had hers done too. From 2014 to 2017 'Home' was a 41 foot narrow boat where we made strong friendships both on and off the water. We were close to nature enjoying swan and duck families for neighbours, and it was a fascinating chapter in our lives. We now reside in a small bungalow on the Lincolnshire coast where we have forged new friendships and interests.
View all posts by pensitivity101 →
This entry was posted in blogging, Challenge, Memories and tagged #flash fiction. Bookmark the permalink.