It has been a horrible day!
Having spent the majority of the daylight hours in A&E, we finally got home to discover a restricted internet service.
Both of us were unable to access our reader for whatever reason (Wifi or WP problem), and when things started to look up, we had those sets of three horrible words hit us in the face:
PROBLEM LOADING PAGE.
NO INTERNET ACCESS
TRY AGAIN LATER.

Neither of us were impressed, though I had managed to access our emails, and luckily there was nothing urgent to respond to. Hopefully I’ll be able to publish this post later without too much difficulty.

Unable to use our laptops to work, blog, read, or do anything other than play non-internet connected games, we decided to take the dog for a walk round the Avenue. I’d already walked her on the figure of eight route this morning, and fortunately MSM was able to have her for us whilst we were incasualty.
On the way back I did some promised shopping for her as well as ourselves.

The plan today was to have chicken curry. It didn’t work out like that as I just wasn’t in the mood to visit two supermarkets as I’d originally intended, so thought along the lines of a meatless sweet and sour .
As it turned out, I managed to get 6 pork medallion escalopes for £1.89, then picked up a red pepper and a tray of button mushrooms plus the various other things MSM wanted and headed to the check out.
By the time we got home it was late, and I was trying to work out a good way of cooking our meal without steaming up the boat with condensation. Cooking during the day means we can open the doors both ends and thus keep it down. Not so in the colder evenings!

I decided on escalopes with a sweet red pepper curry sauce. 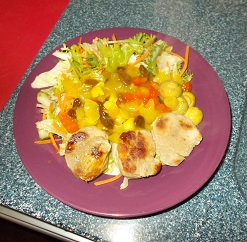 I served mine with salad (different angles) giving it a total of just TWO SYNS for the sugar and a few sultanas in my sauce. 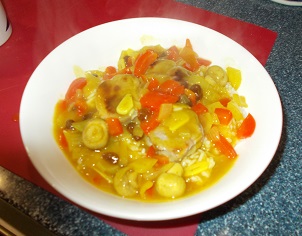 Hubby had his in a bowl with rice with probably an extra couple of syns (if he was counting) because he had the lion’s share.

This is actually the only meal we’ve had today as we missed out on breakfast and lunch due to our unplanned hospital visit, though whilst waiting, Hubby sent me off to the cafe with a fiver for a coffee and something to eat ‘just in case’ because of my diabetes.

Hubby’s OK though. He hit his head on the boat hatchway and put a dent in both.
Because he’s on warfarin, he bled a bit too well, so as a precaution I took him to the local community hospital. After an hour, they decided it would be better if I took him to A&E in the town ten miles away where we waited for another hour before being seen by a triage nurse, and a further 2 hours before seeing a rather young doctor.
After examination, the doc superglued his bonce, and unless the speech goes, or he develops a headache or vomiting etc etc, he should be OK.

Oh, and the hatch is fine too.

I am a retired number cruncher with a vivid imagination and wacky sense of humour which extends to short stories and poetry. I love to cook and am a bit of a dog whisperer as I get on better with them than people sometimes! In November 2020, we lost our beloved Maggie who adopted us as a 7 week old pup in March 2005. We decided to have a photo put on canvas as we had for her predecessor Barney. We now have three pictures of our fur babies on the wall as we found a snapshot of Kizzy, my GSD when Hubby and I first met so had hers done too. On February 24th 2022 we were blessed to find Maya, a 13 week old GSD pup who has made her own place in our hearts. You can follow our training methods, photos and her growth in my blog posts. From 2014 to 2017 'Home' was a 41 foot narrow boat where we made strong friendships both on and off the water. We were close to nature enjoying swan and duck families for neighbours, and it was a fascinating chapter in our lives. We now reside in a small bungalow on the Lincolnshire coast where we have forged new friendships and interests.
View all posts by pensitivity101 →
This entry was posted in food, health, home, narrow boat, oh dear and tagged A&E, accident, humour. Bookmark the permalink.