Most pet owners spoil their furry family members as a matter of course.
Some pets are allowed to sleep on the bed (we hold our hand up to that), or have their personal blanket and cushion in their own chair or sofa.
Some are even spoilt by surrogate Mummies putting the underfloor heating on so that their toes don’t get cold.
But today, Maggie  had waitress service. 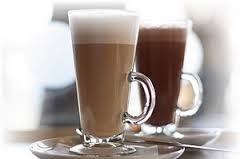 We were introduced to latte coffee several years ago fancying something different and seeing two rather intriguing glasses being brought to the table next to ours.
We asked what they were, and told Latte Coffee. We’ve been hooked ever since, though mainly in the takeout department with a bacon roll as a side.

I’ve mentioned before that Maggie is rather partial to the froth, and will sit patiently waiting for her treat, getting her nose stuck right in and coming out looking like Santa with a brown beard and moustache.
Today is the first time since my op that I’ve walked the full length of the High Street, and we had a breather on the way back for coffee on our preferred bench by the traffic lights. Hubby treated me, and I sat outside with her ladyship.
As we began to people watch, one of the new ladies in the shop came out with a paper mug half filled with leftover frothy milk.
‘There’s no coffee or chocolate in it, ‘she said, ‘but rather than waste it, I thought she’d enjoy it.’
It was difficult to determine which bit of Maggie wasn’t wagging, as she tentatively licked the sides, then thrust her face fully into the cup, closing her eyes in nothing less than ecstasy.

And yes, she still had a bit of our froth afterwards!

I am a retired number cruncher with a vivid imagination and wacky sense of humour which extends to short stories and poetry. I love to cook and am a bit of a dog whisperer as I get on better with them than people sometimes! In November 2020, we lost our beloved Maggie who adopted us as a 7 week old pup in March 2005. We decided to have a photo put on canvas as we had for her predecessor Barney. We now have three pictures of our fur babies on the wall as we found a snapshot of Kizzy, my GSD when Hubby and I first met so had hers done too. On February 24th 2022 we were blessed to find Maya, a 13 week old GSD pup who has made her own place in our hearts. You can follow our training methods, photos and her growth in my blog posts. From 2014 to 2017 'Home' was a 41 foot narrow boat where we made strong friendships both on and off the water. We were close to nature enjoying swan and duck families for neighbours, and it was a fascinating chapter in our lives. We now reside in a small bungalow on the Lincolnshire coast where we have forged new friendships and interests.
View all posts by pensitivity101 →
This entry was posted in animals and pets, Dogs, humour, Maggie and tagged coffee, froth. Bookmark the permalink.

18 Responses to Spoilt or Ruined?