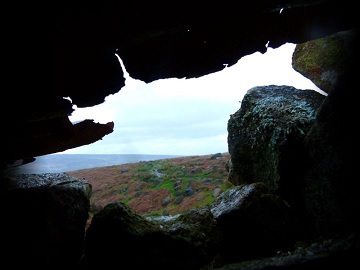 From the sanctuary of his cave, he looked out across the horizon to the sea way beyond the heathers on the hillside.
Over the centuries, he had kept out of sight, coming out to feed under the veil of night, and taking care not to arouse suspicion to his presence.
He had thought no-one would find him, but he had been mistaken.
A young child, deformed and abandoned in the dark, had crawled into his world, instinct seeking out his body for warmth, and curled up inside his mammoth tail.
Who would have guessed he was to become guardian and saviour to another being.
Indeed, who could have guessed he would feel compelled to protect something so alien to him with his life’s force should it be demanded of him.

Like him, the child didn’t age, remaining young and innocent, but he knew it was only a matter of time before they were discovered. Humans would not tolerate things they didn’t understand, were unable to accept anything or anyone who was different.
So far they had been lucky, and for years, the unlikely pair had lived together in an unparalled harmony, two creatures not of this earth but united and loyal to each other.

Actions and gestures were their special language, and from his vantage point to the left of the cave’s entrance, the child leaned in and with his misshapen claw, beckoned him to come out into the breaking day.
The dragon raised a sleepy head, an ear drooping to one side, and nodded.
They were safe for another day.

I am a retired number cruncher with a vivid imagination and wacky sense of humour which extends to short stories and poetry. I love to cook and am a bit of a dog whisperer as I get on better with them than people sometimes! We have recently lost our beloved dog Maggie who adopted us as a 7 week old pup in March 2005. We decided to have a photo put on canvas as we had for her predecessor Barney, and now have three pictures of our fur babies on the wall as we found a snapshot of my GSD so had hers done too. From 2014 to 2017 'Home' was a 41 foot narrow boat where we made strong friendships both on and off the water. We were close to nature enjoying swan and duck families for neighbours, and it was a fascinating chapter in our lives. We now reside in a small bungalow on the Lincolnshire coast where we have forged new friendships and interests.
View all posts by pensitivity101 →
This entry was posted in blogging, Challenge and tagged #write photo. Bookmark the permalink.