We gave Jack his birthday gift today, and he flushed a rather fetching pink.
The tin of boiled fruit drops, although slightly smaller that the overall dimensions of the box, sadly didn’t fit inside because the interior measured less.
No matter, I double stacked the gift with a piece of kitchen roll between the tin and the box to protect the lettering, and wrapped it in some proper birthday paper.
He insisted on opening the parcel while I was there, but keeping the card until ‘The Day’. 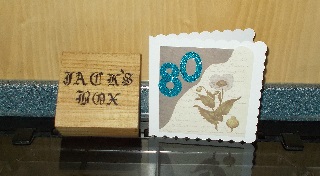 Jack took great care in unwrapping his gift and was really pleased with the sweets as they were his favourite. However, he became quite choked when he saw the box inside as well.
I was asked if the writing was a stencil and said no, Hubby had done it all by hand and eye.
He welled up a bit more, and I had the fiercest hug I’ve had for a long time.
His wife thought it was a lovely idea and together they thought about what to keep in it.
‘Just think,’ he said. ‘There isn’t another box like this in the whole world.’

Hubby was a while coming back from the car this afternoon after we’d been out for something to eat.
Jack had come out to thank him for his present and he stayed to chat for a bit as they were going home later today. They hope to be back next Sunday.

I’ve been left with a warm fuzzy feeling at having given a simple gift to our friend who was obviously chuffed as rocks to receive it.

It is indeed the little things that make life so good.

I am a retired number cruncher with a vivid imagination and wacky sense of humour which extends to short stories and poetry. I love to cook and am a bit of a dog whisperer as I get on better with them than people sometimes! We have recently lost our beloved dog Maggie who adopted us as a 7 week old pup in March 2005. We decided to have a photo put on canvas as we had for her predecessor Barney, and now have three pictures of our fur babies on the wall as we found a snapshot of my GSD so had hers done too. From 2014 to 2017 'Home' was a 41 foot narrow boat where we made strong friendships both on and off the water. We were close to nature enjoying swan and duck families for neighbours, and it was a fascinating chapter in our lives. We now reside in a small bungalow on the Lincolnshire coast where we have forged new friendships and interests.
View all posts by pensitivity101 →
This entry was posted in current events, friends and tagged birthday, Gift. Bookmark the permalink.