It’s been busy here this weekend, what with the market on Saturday, the BBQ for marina residents and guests in the evening, and a beautiful sunny Sunday which encouraged many of our boating friends to go out on the water.
We were tempted, but then the wind picked up a bit so we decided to have a quiet day.
It took us nearly an hour to get off the pontoon to go for an afternoon walk though, as we stopped to chat with owners we are familiar with but don’t see often until the boating season starts.

Woodrow and his owners are here for the weekend, and we were chatting to them last night. They had missed out on the BBQ, not realising that there were vegetarian options available. They will be going home today though as it’s back to work for them tomorrow.

Over the way, one of the bigger boats has the grandchildren visiting, and they were rowing up and down in the dinghy singing ‘Row Row Row your boat’ with slightly (but clean!) different lyrics. We have also heard a couple of babies crying, and the smell of baby talc is ripe in the ladies.

It’s not just people who visit though.
Ducks have been noticeable by their absence this year, and this momma below has disappeared with her babies. 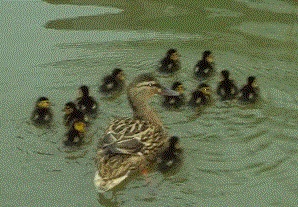 The Migrant Two are still here, currently being pursued by male mallards, ducking (excuse pun) and diving to avoid their amorous and brutal mating.

The moorhens have produced, and all but one baby has perished. They are lousy parents, and leave the little ones to fend for themselves too early. One had built a nest in the engine bay of a friend’s boat, but as soon as they came for the weekend, she abandoned not only the nest, but her two hatchlings and two other eggs. Sadly there was also a dead chick in it.

The swan up by the fuel barge (I took these shots a little while ago) is now sitting on four eggs, and no-one has seen her move for almost a fortnight. Hatching time is near I think.

We do however have a couple of new visitors to the water.
A pair of grebes pass by our bow on several occasions during the day but trying to anticipate where they’re going to surface to be ready with the camera is proving difficult. This was the best I could do yesterday when one surfaced by the dog walk.

Just a bit closer and you can just make him out from this somewhat fuzzy cropped image.

Hopefully I will catch them both later before they depart for new waters.

This is what I’m after (google image). Cute little tufties, aren’t they.

I am a retired number cruncher with a vivid imagination and wacky sense of humour which extends to short stories and poetry. I love to cook and am a bit of a dog whisperer as I get on better with them than people sometimes! In November 2020, we lost our beloved Maggie who adopted us as a 7 week old pup in March 2005. We decided to have a photo put on canvas as we had for her predecessor Barney. We now have three pictures of our fur babies on the wall as we found a snapshot of Kizzy, my GSD when Hubby and I first met so had hers done too. On February 24th 2022 we were blessed to find Maya, a 13 week old GSD pup who has made her own place in our hearts. You can follow our training methods, photos and her growth in my blog posts. From 2014 to 2017 'Home' was a 41 foot narrow boat where we made strong friendships both on and off the water. We were close to nature enjoying swan and duck families for neighbours, and it was a fascinating chapter in our lives. We now reside in a small bungalow on the Lincolnshire coast where we have forged new friendships and interests.
View all posts by pensitivity101 →
This entry was posted in life afloat, Marina, My life, nature, Photos and tagged boating, marina waters, wildlife. Bookmark the permalink.