It’s hard to believe that I did my post on this subject a year ago.
It’s a Bank Holiday weekend here in the UK, the town is packed, and the High Street closed making way for the market stalls selling their wares.
Not much has changed actually.
Hubby and I got our pound coffee from the bakers and sat on the bench by the traffic lights to people watch and eavesdrop on conversations.
It was funny that the lights were still changing despite there being no traffic, and even funnier that some people were actually waiting for the Green Man before they crossed.

Opposite us was a stall selling home-made cakes.
Little cup cakes with scrolls of fondant cream, sprinkles, or chocolate drops sat neatly in rows on the table as the seller conversed with passers-by.
I thought I’d misheard, and tuned my hearing into her next customer who was purchasing 4 cup cakes for herself and her friends as it was her birthday. Eight Pounds.
OK, perhaps she had to pay for the pretty box to put them in, so I listened to the next exchange where only one cake was purchased. Two Pounds. Yikes. 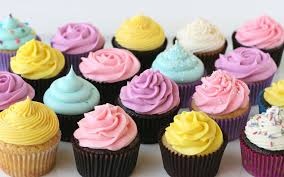 I thought of the generous cream slices, custard slices, chocolate caramel shortbread and the like selling for £1.55 each in the baker’s behind us which we can’t afford, then went in and bought 4 jam doughnuts for a pound. Kinda put things into perspective really.

Suitably fed and watered, we set off towards the bank for the boring check of balances walking down one side of the market stalls.
No ducks or doggies on sticks this year, but the handmade cards were there from £4 each this time, and the candy fudge. Don’t ask.
Hubby saw a stall selling sweets for those with food intolerances or allergies, took two steps closer to read the price, then staggered back nearly falling over his sticks in the process.
Four boiled sweets for £5.  It made me think of the chocolate available for heaven knows how much sporting a ‘diabetic’ label, when as long as the cocoa content is high (dark chocolate has 50 to 70 percent cocoa solids), they are every bit as good, in moderation of course, at a fraction of the price whether you are a diabetic or not.

Soap caught our eye next. Six pounds fifty for a 100g bar, being made with sheep’s milk. I’d want to wash with it, not squeeze it in my tea or drink it, but geesh. What a rip off.

There were several stalls with handmade jewellery, handbags, and one had a handknitted cardigan with two huge red poppies on the front hanging from the rail. I could see three figures for that, and that was enough for me to walk away, though for a handknitted garment with such intricacy, it was probably a bargain.

We saw some fabulous wildlife photographs which had apparently been taken by the stall holder’s husband. Both of them were in wheelchairs, and although well outside our budget, the pictures were beautifully presented and framed, and selling well.
Two stalls up, Hubby saw some pencil sketches and had a closer look. I think he was registering ideas for our forthcoming trip to Stratford and maybe making a few quid.
I’m tempted to set up my card making table. You never know, do you.

For all these extortionate prices (my strawberries from yesterday would have fitted well in), the market was packed, and by the time we’d walked up the other side back to our starting point, the cup cakes had all been sold.
However, they didn’t suit everyone’s taste as I noticed one with a single bite in it having been thrown in the bin.
What a waste of money.

I am a retired number cruncher with a vivid imagination and wacky sense of humour which extends to short stories and poetry. I love to cook and am a bit of a dog whisperer as I get on better with them than people sometimes! We have an elderly dog called Maggie who adopted us as a 7 week old pup in March 2005. From 2014 to 2017 'Home' was a 41 foot narrow boat where we made strong friendships both on and off the water. We were close to nature enjoying swan and duck families for neighbours, and it was a fascinating chapter in our lives. We now reside in a small bungalow on the Lincolnshire coast where we have forged new friendships and interests.
View all posts by pensitivity101 →
This entry was posted in current events, food, Just a thought, money matters, observations, Opinions, people and tagged market, prices, value for money. Bookmark the permalink.

2 Responses to The Conman Market revisited