How does your garden grow?

Fred has not been doing his job and was facing redundancy/replacement.
However, knowing the employment rules, you cannot make someone redundant and hire a replacement, unless of course you change the job description.

This is Fred with his chocolate wages in 2014.
He was engaged as a deterrent to birds pooping on our roof, and has failed. Miserably.

With the addition of our veg buckets and trays, we had hoped that he would at last do something in the pecking order, but No. Poop rules, and the roof looks like a painter and decorator’s apron.

On the subject of our veg project, things are doing pretty well actually. 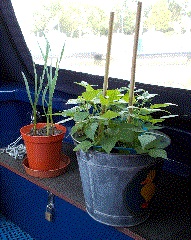 Left to right we have tomatoes (with flowers!), garlic and beans, and our onions.

Taking pity on Fred, we decided maybe we had made a mistake and he needed a facelift. 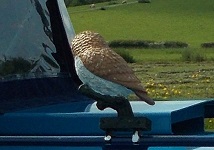 Fred has now been painted as a Barn Owl, which hopefully will make a difference as he guards our veg pots as well as the roof.
We shall be watching, and would remind Fred that Barry is waiting in the ‘wings’ (aka shop).

I am a retired number cruncher with a vivid imagination and wacky sense of humour which extends to short stories and poetry. I love to cook and am a bit of a dog whisperer as I get on better with them than people sometimes! We have an elderly dog called Maggie who adopted us as a 7 week old pup in March 2005. From 2014 to 2017 'Home' was a 41 foot narrow boat where we made strong friendships both on and off the water. We were close to nature enjoying swan and duck families for neighbours, and it was a fascinating chapter in our lives. We now reside in a small bungalow on the Lincolnshire coast where we have forged new friendships and interests.
View all posts by pensitivity101 →
This entry was posted in humour, life afloat, observations, projects and tagged veg project. Bookmark the permalink.

14 Responses to How does your garden grow?