Tuppy’s Holiday……. the morning after.

We woke up this morning to a surprise, but let’s backtrack a little first.

I am learning to ‘read’ Tuppy and when I took her out for a wee each time she ‘did her thing’, I was rewarded. Yesterday in the Tuppy toilet stakes was an excellent day, as I didn’t get it wrong once.  Maggie was content to have the extra bit of exercise to and from the dog walking area, though as expected, she didn’t perform every time we went out.

During the day, Maggie stayed on her blanket on the bench, having the occasional grumble if Tuppy got a little too close to me, but most of the time, she was content in her basket on the floor.
I took both dogs out at 9.30 for the final ‘event’, and we were ready to settle down for the night. However, Hubby had had a phone conversation with MOH and we have been challenged to a game of LUDO, a board we hadn’t made yet! 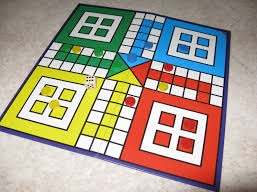 For the next hour and a half, Hubby patiently measured out the squares using a flexible tape measure and a long piece of batten to draw his lines. Kitchenituspilverous wasn’t required this time, apart from my scissors to cut off the board excess. We still have enough for another board game (when we can think of one that isn’t too complicated, or we’ll make one up).
My job today is to colour in the relevant squares and counters.

Thus we didn’t get to bed until almost midnight.
Hubby had got out the sleeping bag a couple of hours before, and at the mention of the word Bedtime, Maggie was off down the other end of the boat claiming her position.
Tuppy was a touch bemused, expecting to be lifted up amongst the pillows on the big bed, and when it didn’t happen, she had a little whinge.
Hubby barricaded the corridor with the cushions off the bench, not only to make room for him to stretch out, but to stop Little One from pushing her luck during the night.

Once the lights were out, everything and everyone seemed to settle down. It took a while for me to get to sleep, but our Plan T appeared to be working. I had to get up in the night (that damn last cup of tea never fails to fill my bladder!), as did Hubby an hour or so later.
Both times our canine guest had a whinge, but not for long.

Three of us were awake at 6am.
Hubby was getting up, so I did too as Tuppy was ‘doing her thing’, so it was obvious she wanted to go out. Maggie couldn’t care less. She was comfy and warm, and didn’t want to go anywhere!
By 6.20, we were all out of the back door to The Surprise.

Would you believe frost? And a heavy one at that!
The pontoon was silvery in its coverage, the boats all shimmering in the early sunshine with the promise of a glorious day to come.
We walked the dogs round the Avenue, Tuppy in her element as it was all new to her having a long walk first thing (it’s paid off by the way, both dogs are asleep now).
We saw absolutely no-one. The marina was quiet, and apart from a rabbit (which was bigger than Tuppy), two blackbirds and a pigeon, nothing else was awake.
When we got back, we wiped off the ice on the inside of our windows and had breakfast.

It’s all different now, still chilly, but sunny and bright.
Here we are at 8.45, and several boats have their fires burning, so I guess everyone got caught out with the unexpected change in temperature.
It appears that around 4am it dropped to just 1º.

Note:
Hubby says Tuppy wanted to get up on the bench a few times during the night, so he more or lessdognapped, but as is normal for him, it was the cold that woke him up.

I am a retired number cruncher with a vivid imagination and wacky sense of humour which extends to short stories and poetry. I love to cook and am a bit of a dog whisperer as I get on better with them than people sometimes! We have recently lost our beloved dog Maggie who adopted us as a 7 week old pup in March 2005. We decided to have a photo put on canvas as we had for her predecessor Barney, and now have three pictures of our fur babies on the wall as we found a snapshot of my GSD so had hers done too. From 2014 to 2017 'Home' was a 41 foot narrow boat where we made strong friendships both on and off the water. We were close to nature enjoying swan and duck families for neighbours, and it was a fascinating chapter in our lives. We now reside in a small bungalow on the Lincolnshire coast where we have forged new friendships and interests.
View all posts by pensitivity101 →
This entry was posted in Dogs, humour, life afloat, miscellaneous and tagged dog sitting. Bookmark the permalink.

6 Responses to Tuppy’s Holiday……. the morning after.