Just a little quickie on observation.

I’ve said previously that Maggie doesn’t travel well now, and there are times when she is a real pain with her pacing and squeaking, even if we have stopped for a potty break or to give her a drink if it’s a long journey.
However, we have realised that if we are doing a constant speed on the motorway or main A roads, she is happy as Larry, and may either sit in the centre of the back seat with her head between our shoulders taking in the scenery directly in front of us, or curl up and go to sleep.
If we are stop/starting in traffic or going through little villages with 20/30 mph speed limits (of which there are a few on the way to MOH and a LOT on the trip down South, whichever way we go), she is totally restless! 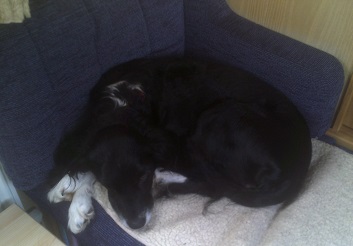 And so to part two of this post:
Our boat is suddenly very popular with the fish.
We have noticed that when we empty the washing up bowl after breakfast, loads of dace and roach are coming up to the surface by the waste pipe for nibbles.

It would appear they are rather partial to rice and bread crumbs, but will ignore bits of meat, veg or scrambled egg.
Their definite favourite though is porridge. This morning, it was quite a fish fin frenzy as they vied for the flakey remnants of our breakfast.
We must also have the cleanest fish in the marina as they seem to bask in the bubbled water!

I am a retired number cruncher with a vivid imagination and wacky sense of humour which extends to short stories and poetry. I love to cook and am a bit of a dog whisperer as I get on better with them than people sometimes! In November 2020, we lost our beloved Maggie who adopted us as a 7 week old pup in March 2005. We decided to have a photo put on canvas as we had for her predecessor Barney. We now have three pictures of our fur babies on the wall as we found a snapshot of Kizzy, my GSD when Hubby and I first met so had hers done too. On February 24th 2022 we were blessed to find Maya, a 13 week old GSD pup who has made her own place in our hearts. You can follow our training methods, photos and her growth in my blog posts. From 2014 to 2017 'Home' was a 41 foot narrow boat where we made strong friendships both on and off the water. We were close to nature enjoying swan and duck families for neighbours, and it was a fascinating chapter in our lives. We now reside in a small bungalow on the Lincolnshire coast where we have forged new friendships and interests.
View all posts by pensitivity101 →
This entry was posted in food, humour, Just a thought, observations, Uncategorized and tagged bait, fish, Maggie. Bookmark the permalink.