I like Vin Diesel.
Not because I think he’s drop dead gorgeous, sexy, or a good actor (no, no, and depends on the role), but because of an extra I saw on The Pacifier showing how he was around the youngest member of the cast. So sweet! 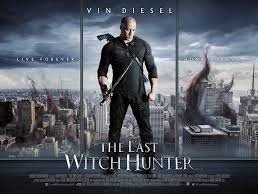 We hadn’t even heard of this release and decided to treat ourselves as it was on the cheaper shelf, expecting it to be something along the lines of Highlander vs Solomon Kane.
The special effects were good, creeping strangling vines, sword fights, smokey haze, spells (naturally) plus bad guys and gals with serious skin issues and bad haircuts.

The story wasn’t half bad, our hero unable to die having been cursed by an overbaked  witch being engulfed by a tree of flame as she pulled his heart out.
Eight hundred years later, all the witches he’d hunted down and put away were chanting together like an audition for a bad Eurovision entry. Having been banished to the belly of the beast sotospeak (a neat little black hole of a spider type creature) their aim was to resurrect the Witch and take the world into darkness, you know, the usual stuff.
Michael Caine (his Religious Aide and friend) got bumped off relatively early and was replaced by The Hobbit and Deep Impact’s Elijah Wood. His big blue saucer type eyes were put to good use, but wearing a white turtle neck sweater does him no favours.
All was not as it seemed, so it became a race against time (both past and present) involving Chloe, a Dream Walker, who became his ally.

On a scale of 1 to 10, I’d give this 7.
A good bit of hokum not to be taken too seriously and certainly not gruesome enough to keep you awake at night.

I am a retired number cruncher with a vivid imagination and wacky sense of humour which extends to short stories and poetry. I love to cook and am a bit of a dog whisperer as I get on better with them than people sometimes! In November 2020, we lost our beloved Maggie who adopted us as a 7 week old pup in March 2005. We decided to have a photo put on canvas as we had for her predecessor Barney. We now have three pictures of our fur babies on the wall as we found a snapshot of Kizzy, my GSD when Hubby and I first met so had hers done too. On February 24th 2022 we were blessed to find Maya, a 13 week old GSD pup who has made her own place in our hearts. You can follow our training methods, photos and her growth in my blog posts. From 2014 to 2017 'Home' was a 41 foot narrow boat where we made strong friendships both on and off the water. We were close to nature enjoying swan and duck families for neighbours, and it was a fascinating chapter in our lives. We now reside in a small bungalow on the Lincolnshire coast where we have forged new friendships and interests.
View all posts by pensitivity101 →
This entry was posted in fiction, film/tv/book, Opinions and tagged movie, opinion, Vin Diesel. Bookmark the permalink.
Loading Comments...
%d bloggers like this: