Sinks, loos, and all that bubbles

Here’s a little thought for you about boat living.
I’ve said on several occasions how much I miss my washing line but there are a few other little things that as householders we probably take for granted (besides space, all mod cons, TV, landline etc).

Our mains water supply is included in our mooring fees, and we manually fill our tank once a week. Saying that though, we are very conservative with our usage, and don’t ‘run’ the taps too long, use a washing up bowl for our dishes, and top up our loo reservoir each time we empty the cassette as we are responsible for our own waste.

Living in the cottage, we had a cess pit, which is often referred to as ‘private drainage’.
We’d always been on mains sewage before, so this was new to us and because our drainage pipes were at so shallow an angle, we soon discovered the ‘correct toilet paper’ to use, one which dissolved quickly and thus didn’t wad up to cause any blockages.
Seeing (and smelling) the disgusting state of our neighbour’s drains after ‘He’ had removed the thick boulder like lumps of fat and everything else ‘She’ chucked down her plug holes, we became very aware of what NOT to put down the sink or flush down the toilet.

Disinfectants, Bleach, Loo Bloo, Ducks and any other household cleaners were definite no-nos as they stopped the cess pit working properly. Learning from their bad habits and a crash course on how cess pits worked when the pipes did get blocked (from the guys who came and cleared them pre proper loo roll), we only had to have ours emptied every couple of years or so.

Obviously for similar reasons, toilet cleaners normally used in a house aren’t used in our cassette, but we clean the bowl with a bathroom spray cleaner every day and use a special product each time it’s emptied, which is usually every two or three days. When we went up to Stratford Upon Avon, we stopped at specific emptying points every day.
It is surprising how much cleaner it is than a traditional porcelain lavvy!

Now on to the subject of sinks.
We have no U bend in either the bathroom or kitchen, and the waste water goes straight into the marina. This is allowed by the way, but again we are careful as to what we put down the sink, so fat from cooking and those annoying little bits of onion or other veg end up being put in a bag, and thrown in the bin. Sometimes a few grains of rice, breadcrumbs or slithers of garlic get ‘washed out’, and the ducks get very excited. I jokingly say I’m saving time by stuffing them first, though times are not hard enough yet for a duck dinner.

The bathroom sink has a very tiny plug, and I mean tiny, at about half an inch in diameter.
In the cottage, our bathroom waste pipes were forever getting clogged with soap and hair. The shower could be a nightmare, but I discovered that by using a washing up brush and rotating it anti clockwise, the hair used to come up to the surface, and I could retrieve the fuzzy mass with little difficulty. OK it wasn’t very nice and a bit pongy sometimes, but at least I could get it out, especially as we found we had no access point under the shower tray.

The sink was another matter, and I found that particularly difficult to keep fresh. Hubby had to take the bend off on a couple of occasions as using ‘drain unblockers’ was not an option because of our private drainage.
With our button sized plughole here, we remove any loose hair using tweezers and thus stale odours can’t build up.

I am not obsessive about housework or overly houseproud, but I cannot abide dirty loos, sinks, kitchens or bathrooms. I have been known to use a whole carton of VIM (that’s going back a bit, before the days of Jif, Cif, and Bang) trying to get a sink clean of tea and coffee stains.
Hubby is the same, so between us we keep the boat clean and tidy. It will never be spotless (impossible with a dog), but we make visitors welcome and hopefully feel at home.

When we were on honeymoon in Amsterdam, we bought a ceramic plaque like this:

Sadly it got broken when we moved into the bungalow in 1998, but we kept it and for years it hung in the scullery in the cottage .

When we were in Skegness shortly after moving to Lincolnshire, we saw this and it has pride of place on our helm door now: 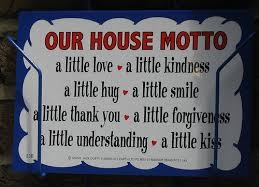 I think it sums up living in a small space perfectly!

I am a retired number cruncher with a vivid imagination and wacky sense of humour which extends to short stories and poetry. I love to cook and am a bit of a dog whisperer as I get on better with them than people sometimes! In November 2020, we lost our beloved Maggie who adopted us as a 7 week old pup in March 2005. We decided to have a photo put on canvas as we had for her predecessor Barney. We now have three pictures of our fur babies on the wall as we found a snapshot of Kizzy, my GSD when Hubby and I first met so had hers done too. On February 24th 2022 we were blessed to find Maya, a 13 week old GSD pup who has made her own place in our hearts. You can follow our training methods, photos and her growth in my blog posts. From 2014 to 2017 'Home' was a 41 foot narrow boat where we made strong friendships both on and off the water. We were close to nature enjoying swan and duck families for neighbours, and it was a fascinating chapter in our lives. We now reside in a small bungalow on the Lincolnshire coast where we have forged new friendships and interests.
View all posts by pensitivity101 →
This entry was posted in change, Just a thought, life afloat, lifestyle, narrow boat, Opinions and tagged boat, cleaning methodology, house, living, motto. Bookmark the permalink.

7 Responses to Sinks, loos, and all that bubbles