Every time we’ve gone out since our return home, we’ve noticed that our host’s curtains and blinds are drawn, so believed her to be catching up on her sleep after her holiday.
The other day though, we were really late going out, and concerned to note that she still wasn’t up. We therefore decided that if they were closed when we got back, we’d knock on the door to make sure she was OK.

That very afternoon, we had a visitor!

As always, the kettle was put on straight away and we caught up with all her news.
We mentioned our concern earlier, and she said she had been ‘sleeping in’ to such an extent that she’d missed a ten o’clock appointment a couple of days ago. Even though she’d set her alarm, which beeped every five minutes if it wasn’t cancelled,  she’d slept through those too!
I asked if she’d put her central heating thermostat back up as we’d turned it down because we’d found it too warm. She laughed and said she wondered why she felt chilly, so would check on it when she got back. She has it up to around 20 degrees, and we’d reduced to 14, then 10 at night. We keep the boat at a minimum of 14 degrees, though with this mild weather, it stays around 18, so we are still quite comfortable, though obviously it can feel colder if we’re just sitting around.

Bless her, she’d brought us back a box of true American chocolates (which were very nice and the texture quite different to what we have over here) and a couple of things we’d left behind in her food cupboard.
When we left, we’d made sure she had plenty of loo and kitchen rolls, biscuits, butter, bread, eggs and cleaning things so that she wouldn’t have to worry about doing any shopping for a few days, but I’d missed the box of stuffing and a sauce mix. She told us there was no need to buy anything, but we felt it only fair to at least replace the basics we’d used during our stay. It’s just the way we are, and we don’t like taking things for granted.

Since then, we’ve met up with several people checking out their vessels after the holidays.
Most knew we were away, and found it amusing how we’d felt about being back in a house.
Some were even surprised that we were glad to be back on the boat after ‘all that space’.
And that was the trouble.
For the two of us, lovely as the house was, it was just too big.
Although we were conservative with the heating and as far as possible our electricity usage (yes, I’m sad and kept a note of the meter readings), we would never be able to afford to live in such a modern property, and were therefore glad that we were ‘just visiting’. 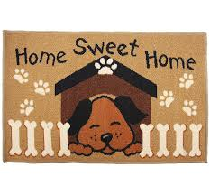 I am a retired number cruncher with a vivid imagination and wacky sense of humour which extends to short stories and poetry. I love to cook and am a bit of a dog whisperer as I get on better with them than people sometimes! In November 2020, we lost our beloved Maggie who adopted us as a 7 week old pup in March 2005. We decided to have a photo put on canvas as we had for her predecessor Barney. We now have three pictures of our fur babies on the wall as we found a snapshot of Kizzy, my GSD when Hubby and I first met so had hers done too. On February 24th 2022 we were blessed to find Maya, a 13 week old GSD pup who has made her own place in our hearts. You can follow our training methods, photos and her growth in my blog posts. From 2014 to 2017 'Home' was a 41 foot narrow boat where we made strong friendships both on and off the water. We were close to nature enjoying swan and duck families for neighbours, and it was a fascinating chapter in our lives. We now reside in a small bungalow on the Lincolnshire coast where we have forged new friendships and interests.
View all posts by pensitivity101 →
This entry was posted in change, diary, friends, home and tagged cost of living, house versus boat. Bookmark the permalink.