Hubby and I are not competitive, not even when we play dominoes or cribbage with MOH (who is………….. terribly). Even when we play Scrabble, it’s not a case of winning or losing, but trying to better our joint score. Our best game is around the 650 mark. I know, those intellectual geniuses who know lots of long words and get triple scores twice by putting down all seven letters are laughing their socks off now. 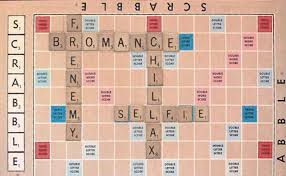 Does this image look odd to you? See below to see if you thought the same as I did.

It was his idea I started my blog having been blogging himself for about a year, and I must admit, I never thought that so many people would be interested in what I had to say or write about. I can’t thank you all enough.

Our blogs are totally different, we have a handful of overlapping followers/follows, and although we talk to each other about anything and everything, I see a different side of him through his blog.
We are at present closely matched, but his stats are rocketing again and he is ‘leaving me standing’ as they say.
Way to go Honey.

Scrabble note:
Whoever goes first, their word has to go through the centre ‘starred’ square.

CHILLAX, a hybrid word combining ‘Chill Out’ and ‘Relax’ scores 90 points, but who would have thought to start the game going up the board with X on the star?
Now if I’d even known this word, had the letters, and put it down, I would have put my X on the double letter score, not the I, thus giving me a score of 104.
Yes, I know, it’s only an illustration, but it made you think didn’t it and these words are all acceptable now, even if they’re not in my twenty five year old dictionary!

I am a retired number cruncher with a vivid imagination and wacky sense of humour which extends to short stories and poetry. I love to cook and am a bit of a dog whisperer as I get on better with them than people sometimes! In November 2020, we lost our beloved Maggie who adopted us as a 7 week old pup in March 2005. We decided to have a photo put on canvas as we had for her predecessor Barney. We now have three pictures of our fur babies on the wall as we found a snapshot of Kizzy, my GSD when Hubby and I first met so had hers done too. On February 24th 2022 we were blessed to find Maya, a 13 week old GSD pup who has made her own place in our hearts. You can follow our training methods, photos and her growth in my blog posts. From 2014 to 2017 'Home' was a 41 foot narrow boat where we made strong friendships both on and off the water. We were close to nature enjoying swan and duck families for neighbours, and it was a fascinating chapter in our lives. We now reside in a small bungalow on the Lincolnshire coast where we have forged new friendships and interests.
View all posts by pensitivity101 →
This entry was posted in blogging, games, Just a thought, observations, Relationships and tagged blog, competition, scrabble. Bookmark the permalink.

9 Responses to Mr and Mrs