Christmas came early and we missed it!

I wonder how many people wish they could just hibernate until the festive season is over.
Well, it looks like we just did!

Hubby and I had a plan this morning to walk up to the Abbey (slowly) to light a candle for our Dads, and then on the way back have a little perusal through the Christmas Market.
Last year, it was very good, even though expensive, but the atmosphere was terrific with some of the stallholders in fancy dress, a brass band playing carols, and some of the truly traditional fayre available that I could remember from my childhood.

The Abbey was very quiet when we arrived just before 11am. There were no services until 5pm, so we were able to make our way to the Lady Chapel and enjoy the tranquility.

We lit our candles and positioned them at the front of the stand side by side, then sat down to reminisce and watch the flames flicker as we imagined the Old Boys in conversation.

These pictures are from one of our first visits after our arrival here.

Maggie curled up under the chair, and we sat there for almost half an hour, it is such a lovely peaceful place.

When we came out, it had been raining but not sufficiently for it to be puddly underfoot or anyone getting soaked to the skin. We were wearing body warmers, but they had hoods, so we could keep our heads warm and dry if necessary!
We turned into the High Street expecting it to be sectioned off and  filled with barrows and stalls.
It was full alright but with traffic and harried shoppers, as it was a normal Saturday.

Thinking about it, we hadn’t seen the market advertised that much this year, and a conversation from last week came to mind about some shops which were usually closed on a Sunday being open, and that it had been a waste of time, effort and staff wages as customers had been so few and far between.

Passing a newsagents, we saw a small poster for this year’s Christmas Market.
Saturday, December 12th.
Last week.
Oh well, at least we can still enjoy the Christmas Lights. 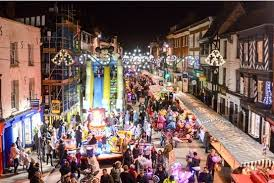 I am a retired number cruncher with a vivid imagination and wacky sense of humour which extends to short stories and poetry. I love to cook and am a bit of a dog whisperer as I get on better with them than people sometimes! In November 2020, we lost our beloved Maggie who adopted us as a 7 week old pup in March 2005. We decided to have a photo put on canvas as we had for her predecessor Barney. We now have three pictures of our fur babies on the wall as we found a snapshot of Kizzy, my GSD when Hubby and I first met so had hers done too. On February 24th 2022 we were blessed to find Maya, a 13 week old GSD pup who has made her own place in our hearts. You can follow our training methods, photos and her growth in my blog posts. From 2014 to 2017 'Home' was a 41 foot narrow boat where we made strong friendships both on and off the water. We were close to nature enjoying swan and duck families for neighbours, and it was a fascinating chapter in our lives. We now reside in a small bungalow on the Lincolnshire coast where we have forged new friendships and interests.
View all posts by pensitivity101 →
This entry was posted in Family, Remembrance, Uncategorized and tagged Abbey, candles, Dads. Bookmark the permalink.

10 Responses to Christmas came early and we missed it!