Hubby wanted to get my Christmas present today, so we drove into town.
I did the same as I did for my Mum when she wanted to buy me earrings, and that was to select half a dozen or so pairs, and then left the final choice to him so that I would have a surprise. The shop assistant thought this was lovely, and said it was the first time she had come across shoppers like us. These are similar to two of my 8 choices today.

Whilst Hubby was making his selection, I went into another shop and had a look round.
Nothing much of interest, same old tacky tat of last year, so I was quite disappointed. Still, that was just one shop so no worries really.

This particular car park isn’t exactly well designed and parking is restrictive at the best of times. Enter one red car with a ‘100 year old’ short sighted female in the driving seat.
She drove with the speed of a sloth, perched with her nose to the steering wheel, peering left and right, and occasionally in front of her.
Having been unsuccessful in one section, she crept across the main entrance to another, which just happened to be where we were parked. There was a vacant space next to us, but she continued to drive down towards the posh supermarket. It reminded me of this:

In the next array of shops, we were able to park directly outside, and entered a rather pretty winter wonderland display in the foyer. I think someone has taken last year’s comments to heart as there was no Wizzard or Slade yelling about Merry Christmas being Every Day as soon as you walked through the door. Either that, or someone had made good on my intention to put a fist through the speakers being sick and tired of hearing the same song, at the same point, on every visit.
Their car park has a better layout, but as we were coming out, a young guy driving a white van almost smashed into us as he cut the corner going in The Out with his eye on a parking space (and little else) .

Food shopping next, and as Maggie had been having a tentative sniff at her tummy, I stayed in the car.
Oh what a delight to watch the comings and goings of vintage drivers, most of which were female. Then I had to stop myself, as approaching 60, I will shortly fall into that category!

I have a friend who is now 83 and still drives. She passed her test aged 74 and to be honest, I would not be a passenger in her car. She took her dog to the vet and demolished the gate posts, one on the way in and the other after reversing off that one and aiming for the other side. She didn’t miss.

On the flip side of the male/female driver coin, Hubby gets twitchy when he sees a cloth flat cap behind the wheel, especially if that’s all he can see. He’s made me promise that if ever he gets ‘that bad’, I hide the car keys. Who’s to say I won’t deteriorate to that extent before him.

Anyway, the supermarket car park is huge. But the Give Way markings aren’t where you would expect them to be, so today I witnessed near collisions between vans, cars and even a mobility scooter as drivers were treating it more like a race track, not slowing down at junctions and just whizzing over the various crossroads, totally heedless of anything coming the other way. 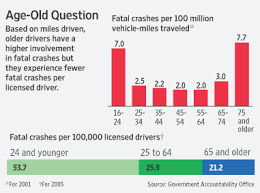 I lost count of the little old ladies on a mission for their tea bags or steredent.
One came to a halt in front of me, then reversed into the vacant space alongside.
I held my breath. With a little bit of tweaking (4 or 5 times) and a final thump against the concrete triangle denoting the position of a tree, she was eventually parked to her satisfaction and got out hitting the door of the car parked on the other side of her. Thank god it wasn’t ours!
The car dwarfed her, she probably sat on a cushion and she was 80 if she was a day!

And I thought my mother in law was bad on her mobility scooter!

I am a retired number cruncher with a vivid imagination and wacky sense of humour which extends to short stories and poetry. I love to cook and am a bit of a dog whisperer as I get on better with them than people sometimes! In November 2020, we lost our beloved Maggie who adopted us as a 7 week old pup in March 2005. We decided to have a photo put on canvas as we had for her predecessor Barney. We now have three pictures of our fur babies on the wall as we found a snapshot of Kizzy, my GSD when Hubby and I first met so had hers done too. On February 24th 2022 we were blessed to find Maya, a 13 week old GSD pup who has made her own place in our hearts. You can follow our training methods, photos and her growth in my blog posts. From 2014 to 2017 'Home' was a 41 foot narrow boat where we made strong friendships both on and off the water. We were close to nature enjoying swan and duck families for neighbours, and it was a fascinating chapter in our lives. We now reside in a small bungalow on the Lincolnshire coast where we have forged new friendships and interests.
View all posts by pensitivity101 →
This entry was posted in humour, observations, people, Uncategorized and tagged cars, driving. Bookmark the permalink.