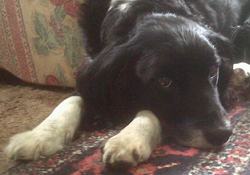 Taken at MOH’s earlier this year

A little while ago, we discovered a lump and rather than panic straight away, kept an eye on it. Maggie has several wart like bumps on her anyway, but we know where they are and there has been no change in them for years.
This was different, and the other week, we both agreed we thought it was getting bigger so decided to take her to the vet.

Our surgery was very modern, the receptionists very nice and the vet……….. a young by the book individual…… professional, but something lacking.
We weighed her before going in and she’d lost a kilo which worried us a little as her appetite was OK.
He told us she had 2 lumps, and put a needle in the biggest one which made her yelp a bit and press into Hubby which she does when she’s afraid or uncertain. He recommended surgery and wondered why we hadn’t had her spayed.
He also said she had a rotten tooth, so that at least would have to be addressed.

With both of us upset and not thinking straight, he bombarded us with jargon and suggestions, then said obviously we had a lot to think about and to let them know what we wanted to do.
Hubby and I hardly spoke in the car, both of us trying to deal with what was best for Maggie and not let her suffer unnecessarily. We were each thinking the worst case scenario, the cost of prolonged treatment for an inevitable negative outcome and quality of life.

In herself, she was fine:  happy, loving, enjoying her walks, having a little rush about if she felt like it, no problems there at all. At least the vet had said she wasn’t in any pain.

A day at Hamworthy Park this year, a familiar place when she was a puppy.

Vet bills here are expensive, and we cancelled our insurance for her a couple of years ago when the premium practically doubled after we’d put in a claim for her leg muscle problem. We decided to put money aside instead in case of emergencies, so we could afford for her to have the treatment, but obviously there would be a limit.

Two days later, I was rushing Hubby to A&E with a suspected heart attack and they kept him in for a week for tests. Luckily it wasn’t and he is on the mend, with extra medication and blood tests twice a week. It was a shitty week.

That same afternoon (the hospital had sent me home as there was nothing I could do), I decided to take Maggie to another vet for a second opinion.
I was thinking more clearly and took in everything he said. He actually found a smaller third lump and suggested a mammary strip. Apparently in older dogs, these lumps can be caused by estrogen when bitches come into season, which is one of the reasons they recommend spaying. I wasn’t given a lecture though or made to feel guilty because we hadn’t had her ‘done’. We had wanted her to have pups but could never find a nice Daddy to mate with her. She’s too old now, but her seasons weren’t a bother, so we left things as they were.

Taken on the boat before our revamp

When I told Hubby, we weighed our options, and sent out feelers to family and friends for their input and opinions.
The way we saw it was :

We could leave things alone, hope for the best and let nature take its course.

We could opt for surgery, and if it was The Big C, decided not to let her go through chemo or radiation therapy, giving her the best we could for the time she had left.

We could agree to the surgery, and lose her under anaesthetic.

She could have the surgery and everything would be OK.

Maggie is 10 years old, 11 in January. That’s almost 77 in doggie years.
She is healthy, fit and young at heart. She is (spoilt rotten and) loved to bits.

We decided to send an email to our vet about arranging for the surgery, asking for a quote. Their estimate (stressed as estimate not a quote) came back as between £500 and £550.
We sent another message with the request that we could stay with her as she went under from the pre med. We also asked if we could be on hand when she came round, after of course they had done all their professional checks, as we know from past experience that Maggie gets a little stressed if we’re not there.
We ended up going into the surgery and talking to the young vet we had seen before.
He was not sympathetic to us as concerned owners, though he did say we could stay with her for a few moments after she’d had the pre med injection. As for afterwards, it was a definite no-no, only his professional team were allowed during recovery.
We pointed out that we understood their procedures, but our two previous vets had allowed us the opportunity to be with her. He wanted to know who they were, and when we said one was in Lincolnshire and the other in Bournemouth, he was not impressed.
Hubby had heard enough and we left, saying we’d be in touch.

He was thinking along the lines of going back to either of our previous vets, but with the seriousness of the operation, after care, and travelling, it just wasn’t feasible, so I suggested we both went to see the other vet who had given me his opinion that day I’d taken him into hospital.

The vet was kind enough to see us after surgery and had Maggie’s examination notes up on the screen when we went in. He explained everything, and promised Hubby tranquilizers for me too if necessary because he could see how anxious I was!
He was what we call ‘Old School’ and his attitude towards us as owners as well as Maggie’s well-being got him ‘the job’ (his estimate was also a little cheaper than the other practice, but that had nothing to do with our decision).
Yes, we could stay with her at the pre med stage, and when she got dopey, they would ‘take her off our hands’.
If necessary and she showed signs of anxiety when she came round, they would call us and we would be allowed to sit with her until she was ready to come home.

In her prime at 3 years old in the Cottage.

Surgery was today.
We took her for a walk this morning as usual.
She performed the business for us, as usual.
Sadly, there was no breakfast treat for her (no food after 7.30 last night), though she was allowed a drink if she wanted it.
It was a lady vet who came out to see us. They weighed her (she’d put on half a kilo, which I took as a good sign), and gave her the pre med injection in reception. She pressed into Hubby’s legs as it stung a bit, but the vet was great and made a fuss of her. After about 15 minutes, she was calm enough to be led away, and we said we’d ring around midday rather than their suggested time of 2.30.

As things turned out, it was 2.30 when we called and we were told everything was fine.
Maggie was OK , the surgery had gone well, she was calm and sleeping, and we could collect her between 5 and 6.30.
We were on the doorstep at 5 to.

She was so pleased to see us.
The wound though is massive, stretching from her groin right up to her front ‘armpit’.
It’s a mess, ugly and raw, but she’ll be OK.
They only found one lump, which was quite big, the other two having disappeared. However, they decided to do the full strip as agreed rather than run the risk of them coming back later which would mean more surgery.
We’ve come away with a bucket collar and a ten-day supply of pain killers. We’ll take her for a post op check up on Friday, and the stitches will come out in about ten days. As the wound is so big, they may well take out every other one first, and the rest a couple of days later.

She’s had a little bit of chicken tonight and is just wanting to sleep. We’ve put her duvet on the floor to stop her having to get up into the chair, with several other layers underneath to keep off the chill. She started to shiver, so I put my jumper over her, and she’s slept solid for 2 hours. She’s turned round now and is actually lying on top of it, her head in the sleeve and her front feet curled round the rest.
I’m sleeping down here with her tonight as she won’t be able to manage the stairs and I don’t want to run the risk of any accidents in the bedroom.

Before we came home, we officially registered with this surgery.
The total bill was over a hundred pounds less than they anticipated.
And as for Maggie’s rotten tooth? She still has it as it was just a build up of plaque and tartar, so whilst she was under, they gave her a descale and polish instead of an extraction.

I am a retired number cruncher with a vivid imagination and wacky sense of humour which extends to short stories and poetry. I love to cook and am a bit of a dog whisperer as I get on better with them than people sometimes! In November 2020, we lost our beloved Maggie who adopted us as a 7 week old pup in March 2005. We decided to have a photo put on canvas as we had for her predecessor Barney. We now have three pictures of our fur babies on the wall as we found a snapshot of Kizzy, my GSD when Hubby and I first met so had hers done too. On February 24th 2022 we were blessed to find Maya, a 13 week old GSD pup who has made her own place in our hearts. You can follow our training methods, photos and her growth in my blog posts. From 2014 to 2017 'Home' was a 41 foot narrow boat where we made strong friendships both on and off the water. We were close to nature enjoying swan and duck families for neighbours, and it was a fascinating chapter in our lives. We now reside in a small bungalow on the Lincolnshire coast where we have forged new friendships and interests.
View all posts by pensitivity101 →
This entry was posted in animals and pets, Dogs, fears and phobias, health, Weekday series and tagged attitude, confidence, Maggie, The Big C, vet. Bookmark the permalink.